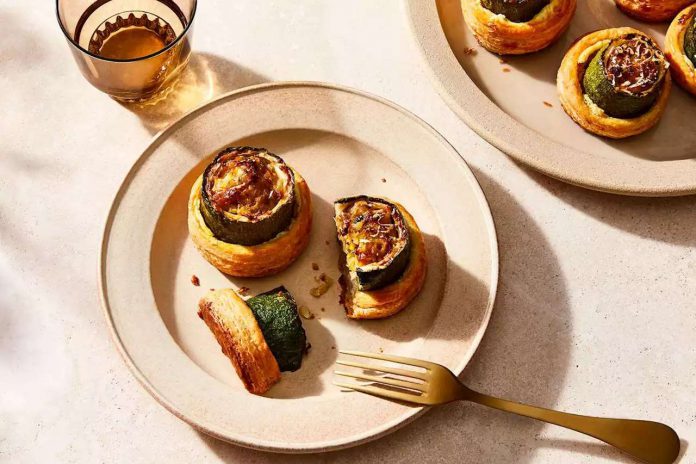 The filling for these zucchini tartlets is drawn from a delicious recipe for stuffed zucchini.

(142 grams) Boursin or chive cream cheese
Egg wash (1 large egg plus 1 tablespoon water), for brushing
In This Recipe
Directions
Golden Cheese Rough Puff Pastry
In a medium bowl, stir the flour and sea salt to combine. Add the butter, tossing through the flour until each individual piece is well coated. Cut the butter into the flour by pressing the pieces between your fingers, flattening the cubes into big shards. As you work, continue to toss the butter through the flour, recoating the shingled pieces. The goal here is to only flatten each piece of butter once, leaving the pieces very large (remember, they will get smaller/more dispersed through the process of folding).
Add the cheese and stir to combine. Make a well in the center of the flour mixture and pour in the water. Mix until the dough comes together; it should be rough in texture, but hold together and not be sticky. If it’s too dry/appears powdery, add more water 1 tablespoon (15 grams) at a time until the dough comes together.
Form the dough into a disk (if you’re multiplying the recipe to make multiple crusts, divide the dough into however many pieces you need before forming into disks). Wrap tightly in plastic wrap and refrigerate for at least 1 hour or up to overnight.
On a lightly floured surface, roll out the dough to about ½ inch/13 millimeters thick. The exact size/shape of the dough doesn’t matter here, just the thickness of the dough. Dust away any excess flour with a pastry brush, then fold the dough in half. Fold the halved dough in half again (the dough will now be folded into quarters and likely sort of a square shape). Wrap the dough tightly in plastic wrap and chill for 30 minutes to 1 hour.
Repeat Step 4 three more times: rolling out the dough, folding, and chilling. If you work quickly, you can sometimes perform two rounds of folds back to back, but if the dough is soft or sticky, don’t try to rush it; chill the dough after each fold. Rewrap the dough and refrigerate for at least 1 hour or up to overnight before using.
Stuffed Zucchini & Tartlets
Using a sharp knife, trim the ends off of both sides of the zucchini. Cut the zucchini into pieces 2½ inches/6 centimeters in length. Using a melon baller or small spoon, scoop out the center of the zucchini and transfer to a small bowl. The goal is not to scoop out all of it; there should be a solid layer of zucchini at the base, with the center hollowed out (so we can stuff it later).

In a large skillet over medium heat, warm the oil. When the oil and pan are hot, arrange the hollowed-out zucchini in the pan in an even layer with one of the flat sides down. Cook for 2 to 3 minutes, until lightly browned and just starting to become tender. Flip and repeat on the other side. Transfer the zucchini to a baking sheet.
In the same skillet with whatever oil remains over medium-low heat, melt the butter. Cook the leeks, stirring occasionally, for about 10 minutes, until very tender. Add the scooped zucchini centers and cook for 20 to 25 minutes more, until well browned and very tender.
Season with salt, pepper, and lemon juice. Let cool slightly, then stir in the Parmesan and bread crumbs. Scoop the leek mixture into the hollowed out zucchini, mounding slightly higher than the top of the zucchini. Set aside while you work with the crust (or refrigerate for up to 24 hours).
On a lightly floured surface, roll out the dough to ¼ inch/6 millimeters thick. Using a round cutter, cut 12 circles of dough, 2½ inches/6 centimeters wide. Using a paring knife, cut the remaining scraps of dough into ½-inch/1-centimeter-wide strips. Using your finger, rub a small amount of water on one side of a strip, then gently wrap it around the outside edge of a round to create a “wall” of thicker dough. Transfer the dough to a parchment-lined baking sheet. If it’s at all soft, refrigerate for 15 to 30 minutes before continuing.
Arrange a rack in the center of the oven; heat the oven to 400°F/205°C. Divide the Boursin among the shaped tarts, placing it in the center and gently pressing into a fairly even layer. Place a stuffed zucchini on top of the cheese. Sprinkle more Parmesan over the top of the zucchini. (Optional step: If desired, use the back of a paring knife to draw the edges of the dough inward to make a pleated look.)
Gently brush the outer portion of the dough with the egg wash. Bake the tartlets for 30 to 35 minutes, until the pastry is deeply and evenly golden brown. If it’s browning too quickly, reduce the oven temperature to 375°/190°C for the remainder of the bake time. Let cool for 5 minutes, then serve warm.
Tags: