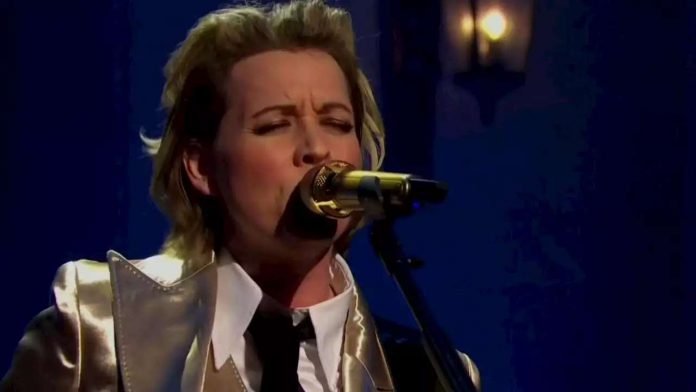 The country songstress rocked gold and wowed the crowd in her first appearance on the show.

Saturday Night Live
musical guest over the weekend, and shined bright in both her sets.
Carlile took the stage for her first number rocking a gold tuxedo and belted out her song”Broken Horses” into a golden mic.
Flanked by twin backing guitar players — Phil and Tim Hanseroth — Carlile brought a rock-star energy and emotional depth to Studio 8H that proved to be a powerhouse of a debut performance.
For her second set of the night, Carlile shimmered in a sequin-covered black and white tux, and stunned with a rendition of her single”Right on Time.”
Starting quiet and reserved, the impressive tune begins with a slow burn into a big, powerful vocal showcase that raised the bar for musical guests for the rest of the season.
As Carlile explained on Friday, in a post on Instagram, her
SNL
appearance is a culmination of years of aspiration and hard work.
She posted a snapshot from rehearsal, showing her sitting cross-legged on the stage and smiling broadly.

The post contained a second photo, from three years ago, when she sat on the same stage while visiting the studio after a performance on
Late Night With Seth Meyers
, which records in the same building.
“How it started vs how it’s going🤘🏼❤️,” Carlile wrote, before reposting her caption from a few years back.”Repost Aug. 21, 2018: On a recent trip to NYC when I was lucky enough to perform on @latenightseth I wandered accidentally into the
SNL
studio looking for the bathroom! I saw the stage and it took my breath away… I don’t know why but I’ve always seen it as a definitive “ok now you’re a rockstar” moment in a persons musical life…I just HAD to grab a pic on the iconic
Saturday Night Live
stage. 🤘ONE DAY we’ll get there man! Dreams come true everyday. 💪🏼🇺🇸💥”

Kids May Be At Risk Of Post-Traumatic Stress From Coronavirus Here’s...