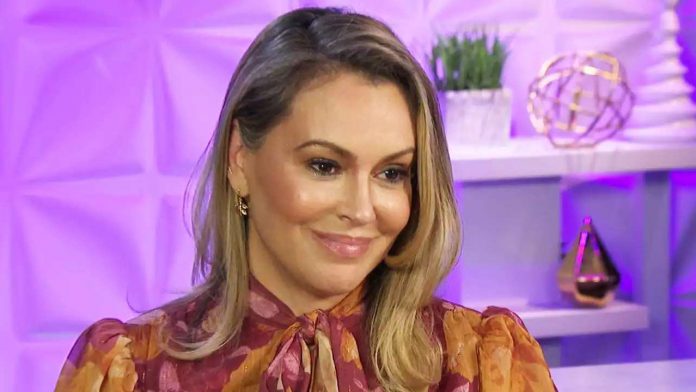 The actress and activist opened up about her time on ‘Charmed,’ her new book and the #MeToo movement.

“I had not dealt with any of my trauma,” the
Insatiable
actress added.”I went from being a victim to a survivor, that transition is not easy at all. It really sucks, but it was necessary. I look at like press events that I went to during that time, and I look so shell shocked because, ‘Me too, me too,’ and I never dealt with it.”
The movement, Milano said, was a major awakening that forced everyone to adjust how they function in everyday life.
“It was, I think, a moment where we had to look at ourselves culturally and socially [and make] real life adjustments to how we function every day, how we function in the workplace, how we function on dates, and it’s still a scary thing,” she said.”Me Too happened when I was already married, and had the workings of my happily ever after. But I’m completely aware of how there were adjustments that needed to be made, that have been hard adjustments for people, and I also understand that there’s a gray area.”
In addition to her own trauma, in her book, Milano addresses the complexity of the movement and that gray area that has sometimes existed with certain situations, particularly with comedian Aziz Ansari, who was accused of sexual misconduct in 2018 after a date he had gone on. In a statement at the time, Ansari said his and his date’s sexual activity”by all indications was completely consensual,” and noted that he was”surprised and concerned” when she texted him afterwards that she felt uncomfortable.
“I mentioned in the book, Aziz Ansari, who I believe what he did was wrong, and I think that if he could learn publicly how to be a better man and teach that lesson to other men who might not understand the gray area, then he deserves a path back,” Milano stated.”I mean, there are certain people, obviously like, the Harvey Weinsteins who should rot in jail, but for those who misstepped, who are willing to learn the lessons that they need to learn, to adjust and help other people along the way, there’s gotta be a way back in.

We can’t just put all these dudes on an island and say, ‘Ah you know what, they’ll figure it out.'”
A post shared by Alyssa Milano (@milano_alyssa)
While it’s been a complicated battle at times, to advocate for tough issues, Milano says that it’s not one she’s going to back down from or give up on, no matter how much hate she’s received online. The activist went on to explain in the book, that there’s been a sort of”target” on her back ever since she’s decided to use her platform to stand up for what she believes in.
“I would say that over 80 percent of my replies are attacking me. I think that women in general have a harder time on social media. I think that Twitter does not have a sexual harassment claim button where as on Instagram if you’re going to report someone for something you actually have the option of choosing sexual harassment,” she explained.”I’m a target and here’s the thing, I’m OK with having people who see me as a threat to their ideology lashing out. I think the harder part is when people with similar ideology lashes out, that to me is a little more hurtful and there have been some. Listen, no activist is perfect, but the point is that you have to keep trying and hopefully you will fail less miserably the next time.”
While it’s been a tumultuous time, Milano told ET that she’s happy to have the book as a record of this moment in history, one she hopes her children, Milo, 10, and Elizabeth, 7, can look back on as she continues to press forward in her pursuit of a better world.
“I think they know their mom is courageous, and I think that they’re trying to figure out where their own courage lies,” she said.”I’m just super grateful.”
Milano’s new book,

Latinx Americans Should Not Have to Bear Witness to Trump’s COVID-19...