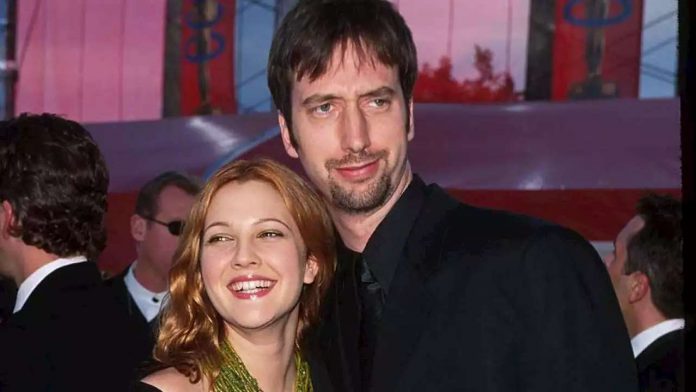 The pair reunited on ‘The Drew Barrymore Show,’ after not seeing each other in person for nearly 20 years.

green screen technology
.
“Last year, I was reunited with someone very special, the wonderful Tom Green,” Barrymore shared. “We were married, and it was just so wonderful to reconnect with him. And, people thought that we were really together, but the truth was, he was 3,000 miles away in Los Angeles to be safe for COVID, and we used our phenomenal green screen technology that I am so proud of because it is so good and seamless, but it leads to probably not realizing that we have not seen each other face-to-face actually in almost 20 years, but he’s here.”
Green joined Barrymore at the news desk for her”Drew’s News” segment, where the pair broke down the best good news stories of the day and caught up on some of their most memorable moments as a former married couple.
Barrymore and Green, who starred together in 2000’s
Charlie’s Angels
, were married for one year before calling it quits in 2002.
“Remember the road trip we took through Ireland…We hiked up this crazy mountain for hours. We were determined to reach the top but at certain points I don’t think we thought we ever were going to,” Barrymore recounted.
“I remember a couple of things. I think we may have hiked up two mountains. I remember one mountain we go to the top, it was foggy, and there was a sheep up there that hadn’t been shorn in years,” the 50-year-old comedian replied.
“And headstones. It was a mini cemetery,” the
Santa Clarita Diet
actress added of their honeymoon trip, which she called one of her”favorite” trips she’s ever taken.
After reflecting on their time in short, wedded bliss, Barrymore’s frequent guest on the show, Ross Matthews, asked the former couple what it felt like to see each other after nearly 20 years.

“I kind of feel like I’m watching this too right now…It’s sort of a little bit like an outer body experience. It’s very nice to see you, it does feel weird though. Not weird in a bad way, weird in a good way. Thanks for having me on the show. It’s awesome,” Green said of their reunion. “This is cool. I actually think this is kind of a nice way of reconnecting, takes a little bit of the pressure off.”
“Well, I respect and love you,” Barrymore gushed.”Aww, thank you, Drew. Love you too,” Green replied.
Ron Galella, Ltd./Ron Galella Collection via Getty Images
Matthews then asked the exes,”Would you ever go to an ex’s wedding?”
“I’ve never been invited to an ex’s wedding,” Green replied, making a point to look at Barrymore, who was seated next to him. Barrymore married Will Kopelman following her divorce from Green. She and Kopelman later split in 2016.
While Green never got an invite to Barrymore’s nuptials, he told the talk show host he understood why she didn’t extend an invitation.”Makes sense to me,” he said.”Honestly, I think it makes sense to probably not go to an ex’s wedding.”
Barrymore agreed, telling Green,”I think so, too.”
Shortly after their initial reunion last September,
Barrymore opened up to ET’s Kevin Frazier
about reconnecting with the comedian, after not speaking for nearly 20 years.
“It wasn’t for TV and TV sensationalism,” Barrymore shared.”It’s very emotional and there was a meaning and a depth to it, but a fun celebration.”
“We were just kids. We’re both more grown up now and there has been a whole life lived,” she added.”It’s wild to reconnect.”
The Drew Barrymore Show
airs weekdays 9:00 a.m. ET on CBS.
RELATED CONTENT

Megan Fox May Have Just Revealed She Got a Tattoo of...