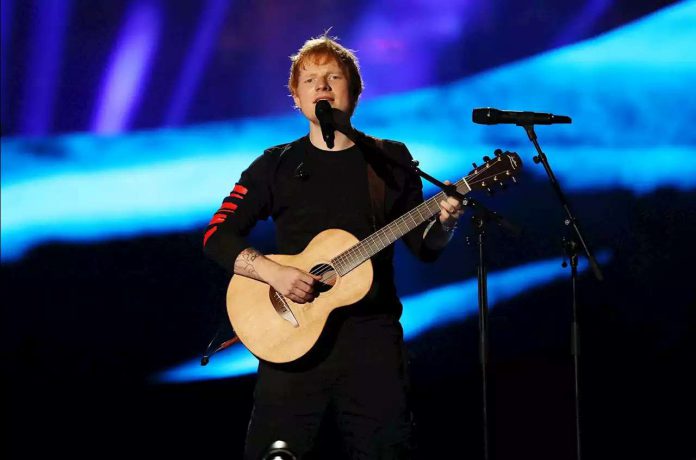 “Shivers” video, which finds Ed dressing up in an homage to pal Elton John’s feathery outfits and hanging out in a morgue with his beloved.
YouTube Shorts Preview
If you simply cannot wait to hear the album, Sheeran provided Sheerios with a first-of-its-kind preview of the album via a collab with YouTube on a series of 14 video shorts — one for each song on the album — which dropped on Monday morning (Oct. 25).
The clips, which each run 20 seconds or less, cover a wide range of scenes, from Sheeran pounding the drums to the high-energy opening track”Tides,” to him stepping into a bathtub filled with ice while wearing a suit in the”Shivers” bit and smiling at a man dancing in a doorway with a giant bowl of chips for”Bad Habits.”
Elsewhere, Sheeran and his wife Cherry lounge around, kiss and flirt in the affecting preview of the gentle acoustic ballad”First Times,” Ed busts out a spray can for some freestyle painting to the strains of the wistful acoustic pop gem”Overpass Graffiti” and he spotlights his cat’s adventures in the adorable”The Joker and the Queen” short for the hushed piano ballad.

We also hear a bit of the yearning mid-tempo”Leave Your Life,” the remix-ready dance pop tracks”Collide,””2Step” and”Stop the Rain,” as well as the sweeping acoustic jangle of”Love in Slow Motion,” the tear-stained acoustic homage to those we’ve lost,”Visiting Hours,” the bouncy lullaby”Sandman” and the bubbling, beat-driven album closer”Be Right Now.”
Ed Sheeran Tests Positive for COVID-19 Days Ahead of His New Album Release
Tour Dates
Though he hasn’t yet unveiled his North American tour plans, Sheeran has dropped the dates for his upcoming
, which will include shows in Belfast, Manchester, London, Amsterdam, Paris, Copenhagen and Belfast. The tour is currently slated to kick off on April 28 in Cork, Ireland and last through a Sept. 23 gig in Frankfurt, Germany.
SNL

Leave It to Cardi B to Wear the Ultimate Luxury Leggings...