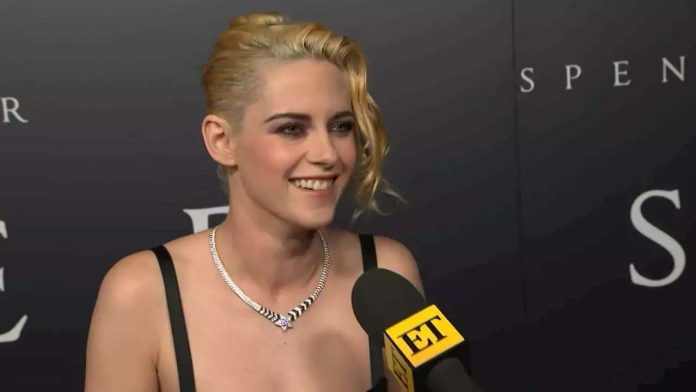 ET spoke with the actress about wearing a replica of Princess Diana’s wedding dress and the emotion she was trying to convey.

Spencer.
The 31-year-old actress admitted to ET’s Lauren Zima that donning the royal’s wedding dress replica in the movie was”a spooky” moment for her.
“When we put that dress on, it is embedded in a montage that kind of flashed her life before you. Even though the movie takes place over a three-day period and even though I play her as a speculatively 29, 30-year-old person, we still wanted to give a taste of the scope of her life,” Stewart shared at the Los Angeles premiere on Tuesday.”Kind of touch on every part, even if it was in kind of lyrical dance. And the wedding dress is embedded in that montage and putting that on was a spooky day.”
“We didn’t have to do the wedding scene but I still had one walk, walking outside of this castle,” she recalled.”I was like, ‘Wait, but this is so particular.’ This actually does land on a very precise day of her life and [the director Pablo Larraín] was like, ‘Take everything you learned about that day, all of your emotional responses that you have accumulated, put them all right here. What does it feel like to believe in an ideal that then becomes very, very apparently farcical? It’s kind of just like, let your heart break in a moment.’ I was like, ‘OK got it. Let’s go.”
Getty Images
Spencer
is set in December 1991, and focuses on three days of the princess’ short life, as she faces the end of her marriage to Prince Charles while spending Christmas at Queen Elizabeth’s Sandringham Estate in the 1990s.
Additionally, Larraín also told ET that filming the wedding dress”was a big day.”
“It was very iconic, I think Jackie Duran and her team, our costume designer, worked really hard on it and it’s obviously a very particular dress that we all remember,” he expressed.”I think when [Kristen] wore it, she was, she had mixed feelings. She was scared and excited, which also worked for the character as we were shooting. We got to that, I think that’s exactly what’s in the movie.”
“It wasn’t fear, it was the challenge of wearing that dress, taking that on and it was hard to walk with it. It was a big structure,” he added.

It’s not in the movie, but the train had 30 feet, maybe more.”
For the role, Stewart wore over 100 looks, including iconic replicas of Diana’s classic ensembles. One piece was a custom-made Chanel gown, which was a recreation of the 1988 mermaid dress that is seen in the
Spencer
poster.
Neon
“We had more than 100 looks for her and I know some were more delicate than others. The Chanel Couture dress she wears, that one was an old one that came from the archives,” Larraín shared.”We wanted to work with it but they didn’t allow us to use it because it was from the archives, but they did a new one for us and if you look at it, it’s really beautiful what they did.”
Stewart, on her end, admitted it was her favorite look, saying,”It’s my favorite look in the movie and it’s hard to say something like that because it is just top to bottom a very, very beautiful costumed film. But this is like Chanel couture deconstructed to the max. Like Diana doesn’t actually end up in the dinner she is supposed to in that dress, she ends up in the bathroom in a bit of a heap.”
The actress is already garnering Oscar buzz for her role as the Princess of Wales. As for her thoughts on the royal family watching the film, she hopes they know that they”led with love and curiosity.”
“If they want to spend their time indulging their own curiosities about ours, I would say that we led with love and the only reason we made this movie is because that person that we will never be able to know is somebody that influenced us intimately and we’re still talking about her,” Stewart explained.”I think that the very literal legacy that she left behind in her boys are — for me, as somebody who attempted to dream about her and her life and imagine what her life must have felt like, in a way that is not even remotely an authority, this is too personal — being somebody that played Diana, she would be so proud. All I would say is that we led with love and curiosity. And professed to know nothing. We’re literally just sort of admirers.”
Spencer

Margot Robbie Hasn’t Seen Any Star Wars and Will Continue to...