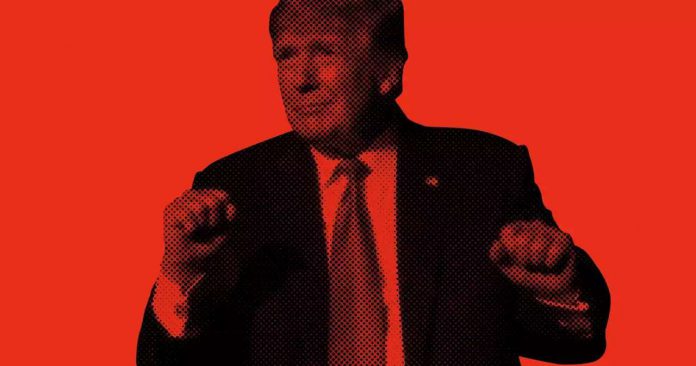 Trump wants to erode democracy. They just want to win.

If Terry McAuliffe holds on to defeat Glenn Youngkin in the Virginia governor’s race, a large number of Republicans will blame Donald Trump. McAuliffe has assiduously tied Youngkin to Trump. Youngkin has followed a careful strategy of appealing to both Trump cultists and moderates. Should he lose, it would be a proof point that blue-state Republicans can’t keep a foot in both camps. They would have to denounce the former president more forcefully to gain the credibility they need to win statewide office, a step that would erode Trump’s influence over the party.
So a McAuliffe win would be a devastating blow for Trump’s power base within the Republican Party. Yet here is a funny thing. Nobody within the Republican Party, not even the Republicans who complain about his influence, wants this outcome.
What’s the reason for this curious choice? It’s not that mainstream Republicans are morons. They’re perfectly aware of the stakes Trump has in the race. But they have other, normal Republican reasons to prefer a Youngkin victory: They would end Democratic control of Virginia, throw a scare into national Democrats, help their own fundraising, and so on. And faced with a choice between advancing normal Republican politics and prying their party loose from Trump’s grip, they are picking door No. 1 en masse.
This is the basic choice the Republican Establishment has been making for more than half a dozen years now. The last time Republicans made it was during Trump’s second impeachment. At first the insurrection so revolted them they briefly set out to make a permanent break that would prevent Trump from running again. Then they lost their nerve but told themselves they would isolate him from the party and eliminate his power without holding an impeachment vote. Then they simply gave up on that plan altogether.
The Republican Party is roughly split between those who share Trump’s belief that Democratic election wins are inherently fraudulent and those who just want to move on. A fight between a faction that primarily wants to win and a faction that primarily wants the fight to end can only go one way.
Trump has a talent — it is one of his few positive attributes — for sniffing out human weakness. He grasped early on that while many Republicans objected to his behavior, few of them cared about it more than they cared about winning. And so he keeps giving them the choice of splitting with him and his base and risking political defeat, or sticking with him and having a chance to win. They consistently choose the latter.
Republican senator Roy Blunt’s interview with Andrea Mitchell is a perfect glimpse into the view taken by the party Establishment. Asked if he agreed with Trump that the election, not the assault on the Capitol, was an insurrection, Blunt demurred: “I think the election was what it was … The best thing president Trump can do to help us win majorities is talk about the future.”
Should the future involve Trump as the presidential nominee? Blunt demurred again: “There are constitutional provisions about being a candidate, and having opinions that other people may not agree with is not one of those provisions. He can be a candidate if he wants to be.” Republicans had once contemplated disqualifying Trump via impeachment because of his effort to undermine the election, but Blunt was no longer even considering such behavior as one of the disqualifications for office.

The closest thing Blunt had to a criticism was that Trump was hurting his party by drawing too much attention to himself. “Frankly,” he told Mitchell, “the only thing that Joe Biden and Donald Trump agreed about in 2020 was they both wanted the election to be all about Donald Trump.” Of all Trump’s behaviors, this is the one that rouses intraparty opposition: when he goes off-message in such a way as to harm the party’s electoral prospects.
Republicans have made this calculation so many times they have ceased thinking about it as a choice at all. The Washington Post’s new profile of House Minority Leader McCarthy begins with a moment like this:
House Minority Leader Kevin McCarthy has regaled top donors at private events in recent months with a behind-the-scenes story about a fight he says he had with former president Donald Trump.

The 2020 clash began when Trump broke an agreement with McCarthy to consult before making endorsements in House races and took sides in a North Carolina primary contest. The California Republican responded by calling up Trump with curse-laden fury, he has told donors. When Trump’s candidate lost in the primary to McCarthy’s pick, Madison Cawthorn, Trump acknowledged that he had been wrong and, McCarthy argues, he gained respect for his advice.
McCarthy’s anecdote is very telling. It shows him standing up to Trump. But why? Because Trump threatened democracy? No, because Trump threatened to cost Republicans a House seat. What’s more, the moral of the story is that McCarthy was right to endorse a candidate, and the candidate he picked was … Madison Cawthorn — a Trump cultist who has not only amplified Trump’s election lies but threatened “bloodshed” if future elections repeat the outcome of 2020 (i.e., a Republican loss.)
McCarthy has also made news of late for his ruthless plan to isolate Representative Liz Cheney. Having already stripped her of her leadership rank over Cheney’s refusal to abide Trump’s ongoing attack on democracy, McCarthy is now threatening any consultants who help her fend off her Trumpian primary challenge that they, too, will become persona non grata.
After impeachment, remember, the Republican plan was to isolate Donald Trump to make it impossible for him to have a future in Republican politics. Now Republicans are carrying out this plan against the surviving anti-Trump Republicans.
The primary lesson of How Democracies Die, the study by Daniel Ziblatt and Steven Levitsky of democratic systems that turn authoritarian, is that the key decisions are those made by allies of potential authoritarian leaders. Those allies can choose either to help the authoritarian, and thus gain entry into a governing coalition, or side with the opposing party in order to preserve the system.
If Trump or his successors ever bring down American democracy, history will record that Republicans decided to cast their lot with him. Indeed, all the evidence we have is that they never even considered the alternative.

153 of the best celebrity Halloween costumes over the years