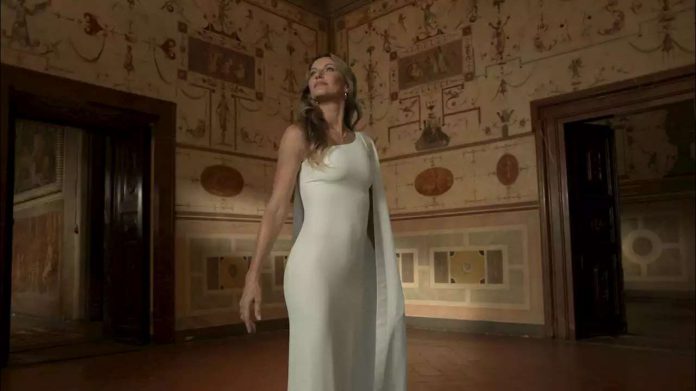 ‘This year the Renaissance Awards reflect a reimagining, rebuilding, and reframing of such scale and opportunity that there is an obvious parallel,” says Livia Firth, creative director & co-founder of Eco-Age.

Save Story
Save this story for later.
Honoring cultural luminaries of all sorts through a digital show, the first-ever Renaissance Awards took place this past week. Brought to audiences by Eco-Age and Pulse Films, the award show was presented through a decorative film set at the iconic Palazzo Vecchio in Florence. Augmented reality and special effects played a supporting role to the evening’s presenters, which included Nile Rodgers, Colin Firth, Gisele Bundchen, Ahad Raza Mir, and Annie Lennox. Ben Harper treated audiences to a serene guitar performance towards the end of the show.
“A renaissance is made up of a lot of ideas—contagious ideas that spread and infect others, that grow, to make up an irreversible shift. This year the Renaissance Awards reflect a reimagining, rebuilding, and reframing of such scale and opportunity that there is an obvious parallel,” says Livia Firth, creative director & co-founder of Eco-Age.

The new age that Firth is alluding to expands beyond the arts. Instead, it encompasses young thought leaders that are working to create a world that is socially just, economically inclusive, environmentally restorative, and technologically balanced. Presented by actress and model Indya Moore, the premiere Renaissance Awards Digital Creator title was awarded to LGBTQ+ activist Chella Man. “I feel so appreciated and understood. The world that I’m striving towards exists at this moment,” Chella Man said.
Alongside recognizing innovation, the awards show also replaced physical statuettes with non-fungible tokens donated to each winner by strategic partner method.
As a digital green carpet followed the ceremony featuring stars like Julianne Moore and Stanely Tucci, one couldn’t help but be excited for this dawn of a new age.
Watch the awards

Here’s why we need to keep statues and reminders of the...

Er Khloe And Tristan Weren’t Technically Together When He Cheated