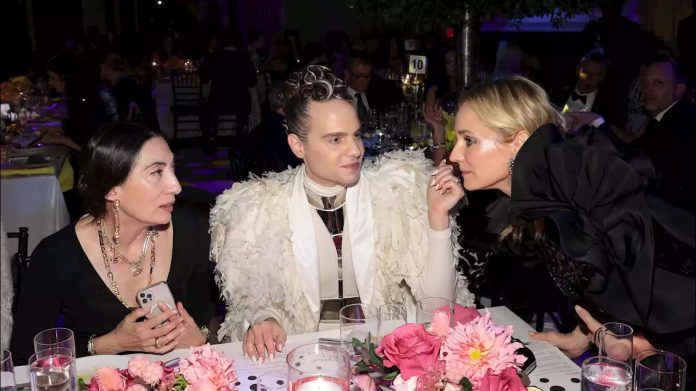 Save Story
Save this story for later.
At Tuesday night’s gala dinner celebrating the opening of the American Ballet Theatre’s fall 2021 season, guests noticed something odd. (The evening marked the return of the company’s in-person programming after a pandemic hiatus stretching almost two years.) Stranger than the masks on the faces of all the patrons was the absence of dancers—not because they didn’t want to join in on the fun, but to fend off any chance of infection from COVID. Without the dancers, after all, there is no ballet, and boy did we all miss them.
Before the night’s entertainment began, guests could tour the promenade level of the David H. Koch Theater, which featured works by photographer Quil Lemons curated by Sarah Hoover. In addition to shooting
that
Billie Eilish cover for
Vanity Fair
, the Philadelphian photographer is known for capturing Black queer culture, and a selection of his imagery will be on display through the end of the ABT season.
Lemons’s work was echoed on stage (or vice versa) in the IRL adaptation of choreographer Christopher Rudd’s
Touché
, which stars Calvin Royal III and João Menegussi in a male-male pas de deux rarely seen in the world of classical ballet. The moving piece, which tracks the confusion and second-guesses of desire between two men, garnered a standing ovation. And earlier, the crowd absolutely loved
La Follia Variations,
the opening ballet from Lauren Lovette, who freshly retired from dancing with the New York City Ballet to focus on choreography. For this, designer Victor Glemaud did the costumes, his mastery of knitwear translating perfectly into body-skimming unitards that followed every inch of the dancer’s incredible bodies. With music composed by Francesco Geminiani and arranged by Michi Wiancko, the piece is an absolute delight. Later came a saucy, jazzy excerpt from Darrell Grand Moultrie’s
Indestructible Light
and then the final ballet of the night:
ZigZag.

Choreographed by Jessica Lang and set to songs recorded by Tony Bennett (Lang frequently sets her pieces to Bennett’s tunes), the dance was made even more delightful by the costumes whipped up by Wes Gordon, the creative director of Carolina Herrera. There were mini tutus splashed in polka dots (a wink to Herrera’s spring 2020 collection) and 1950s prom dress-esque circle skirts in peppy pinks and yellows.
In her opening remarks, principal dancer Misty Copeland (who wouldn’t be dancing that evening) celebrated what the company had been up to during its long hiatus. “This past summer [ABT particpated] in ABT Across America, a multi-state tour, where we took our own stage rock-concert style on wheels,” she said, dressed in a floaty Vera Wang look. “It has been, literally, a long road. My colleagues have been training for months to be ready for this moment to perform here for you. From the bottom of our hearts, thank you for your generous and consistent support.”
After the dancers gave their final bows, select members of the audience made their way to the dinner. Diane Kruger was in attendance on Gordon’s arm; Brooke Shields appeared, dazzling in lacey red; Victor Glemaud and Hamish Bowles coordinated in subtle animal prints; Tommy Dorfman hung out with Paul Arnhold; Ariana Rockefeller looked lovely in lavender; and Jordan Roth brought his signature show-stopping flair to the night in a feathery chiffon ivory look. Also wearing feathers was Lili Buffett, who—along with her glamorous tablemates—wore a dress by Danarys.
So, sure, the ballet dancers weren’t able to join the post-dinner dancefloor (always a highlight of the annual ABT gala), but it only meant that to see them again, we’d all have to return to Lincoln Center another night. And that isn’t so bad, is it?
Dimitrios Kambouris