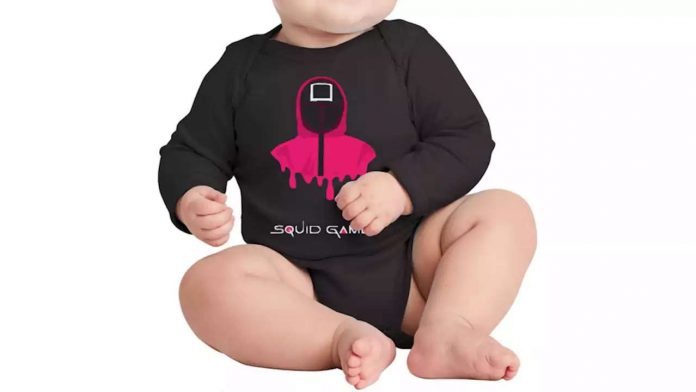 Red light or green light? Costumes based on Netflix’s smash hit “Squid Game” have soared in popularity this Halloween — and searches for baby costumes based on the ultra-vio…

according to the internet giant
. In addition to being the top-trending Halloween costume search overall, “Squid Game” is also No. 1 for baby costumes, per Google.
After “Squid Game,” the top-trending baby costume searches this week were: Little Red Riding Hood, spider, Peter Pan and Addams Family. Overall, “Squid Game” was the top U.S. costume search, followed by gorilla, Britney Spears, carnage and venom (the last two related to Sony’s recently released antihero flick “Venom: Let There Be Carnage”).
Among the top “Squid Game” baby costume search results is a long-sleeve baby bodysuit (
pictured above
available for $25.95
in sizes ranging from newborn to 18 months from etailer Artist Shot. At this point, however, you’re not going to get it in time for Oct. 31.
As it happens, “Squid Game” mania is providing a spillover tailwind effect for anything squid-related: The baby pullover red squid Halloween costume from Hyde & Eek! Boutique ($25
at Target
) pops up in searches for “Squid Game” costumes even though it’s not even tied to the Netflix show.

Meanwhile, for some schoolkids in New York, “Squid Game” costumes have become verboten: Three elementary schools in Central New York
banned students from wearing the costumes
because of the brutal violence depicted in the show.
“It would be inappropriate for any student to wear to school a Halloween costume from this show because of the potential violent messages aligned with the costume,” Fayetteville-Manlius School District Superintendent Dr. Craig Tice said in a
to USA Today. According to Tice, district staffers had observed students mimicking games from the show during recess, raising red flags for administrators.
SEE ALSO: