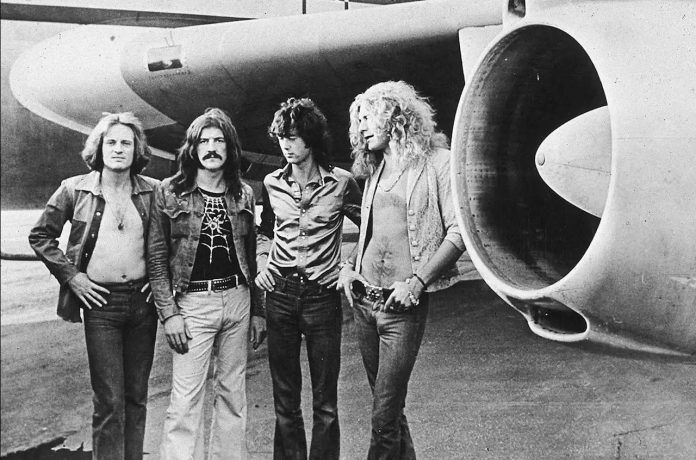 officially dove into the viral video breach on Tuesday (Oct. 26) with the launch of the classic rock band’s official TikTok page. The band announced their presence with an eight-second snippet of the remastered version of their 1970
Led Zeppelin III
track”Immigrant Song.”
By joining such peers as The Beatles — who made their TikTok bow earlier this month — the Robert Plant/Jimmy Page-led group opened up their catalog to the viral video service’s community by offering their graphics and artwork, as well as iconic live and studio recordings and other video content.
The”Stairway to Heaven” band’s full discography of 100-plus live and studio-recorded songs can now be used by TikTokers to make original videos, which means you can expect your little cousin to bust out some moves to such FM-radio staples as”Whole Lotta Love,””Kashmir,” Good Times Bad Times” and”Black Dog” any minute now.
Artist Mentioned
Jimmy Page Attends Venice Film Fest for Led Zeppelin Doc Premiere
Zeppelin — which also included late drummer John Bonham and bassist John Paul Jones — took their time joining the digital music fray, famously holding out until offering their music on Apple’s iTunes in 2007.

In addition to the”Immigrant” bit and the band’s logo, the hashtag #Rocktober accompanied Zep’s first TikTok post.
The first authorized documentary about the pioneering hard rock group that raged from their founding in 1968 to their dissolution in 1980 following Bonham’s death,
Becoming Led Zeppelin
, premiered at the Venice Film Festival in September.
The film contains never-before-seen footage of some of Zep’s early U.S and British shows, an audio interview Bonham gave to an Australian journalist before his 1980 death, and interviews with the three surviving members.
Check out the band’s first TikTok post below.
By

In This Registered Dietitian’s House Dessert Comes Before Vegetables