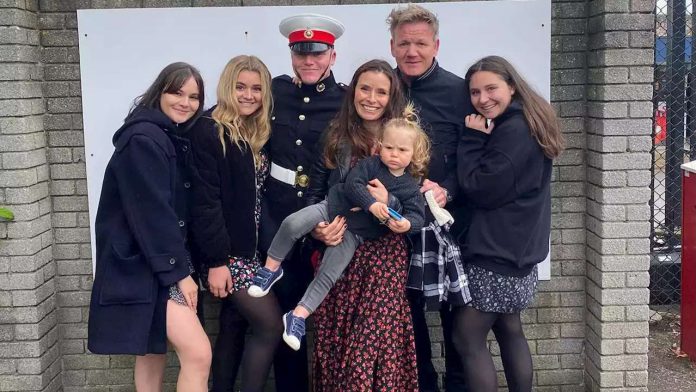 Gordon, Gino and Fred: Road Trip
but how much do you know about Gordon Ramsay’s family?
Who is Gordon Ramsay’s wife?
Gordon and his wife Cayetana “Tana” met in 1992 before marrying in December 1996.
Although originally a Montessori-trained schoolteacher, Tana is publically known as a cookbook author. She has also previously appeared on Dancing on Ice in 2010 although she was eliminated in the fourth week.
Watch our Instagram Live with Tana below!
Gordon Ramsay’s children
Together Gordon and Tana have five children: Megan, Holly, Jack, Matilda, and Oscar.
Before Oscar was born, the couple sadly experienced a miscarriage in 2016 when Tana was five months into her pregnancy. Posting the news on social media, Gordon wrote:
“Hi guys, Tana and I want to thank you so much for your support over the past couple of weeks. We had a devastating weekend as Tana has sadly miscarried our son at five months. We’re together healing as a family, but we want to thank everyone again for all your amazing support and well wishes. I’d especially like to send a big thank you to the amazing team at Portland Hospital for everything they’ve done.

Gx.”
Megan Jane Ramsay
The eldest of the Ramsay bunch, Megan is relatively private although she did appear in an episode of Hell’s Kitchen with her father. She studied Psychology at University.
Holly Anna Ramsay
Jack Scott Ramsay
Holly and Jack are 21-year-old fraternal twins.
Holly is a digital creator and also has a modelling contract. She co-hosts the mental health podcast
21 & Over
with psychotherapist Talitha Fosh where she opens up and shares her journey with mental health along with other guests.
Sporty Jack played rugby in secondary school and also studied Jiu-Jitsu. In 2020, he joined the Royal Marines.
Megan and Jack ran the London Marathon in memory of their unborn brother.
Matilda “Tilly” Ramsay
Probably the most famous of Gordon’s children, Tilly presented the BBC cooking show
Matilda and the Ramsay Bunch
on CBBC alongside her family.
She is also currently competing on Strictly Come Dancing with dance partner Nikita.
Oscar James Ramsay

The Best Activewear Brands To Get You Moving In Style

London Based Online Fitness Coaches You NEED To Follow!

The Beatles Unveil New Advent Calendar for the Holiday Season