Home Woman “It Made My Brother Cry” Your Worst Thanksgiving Disasters 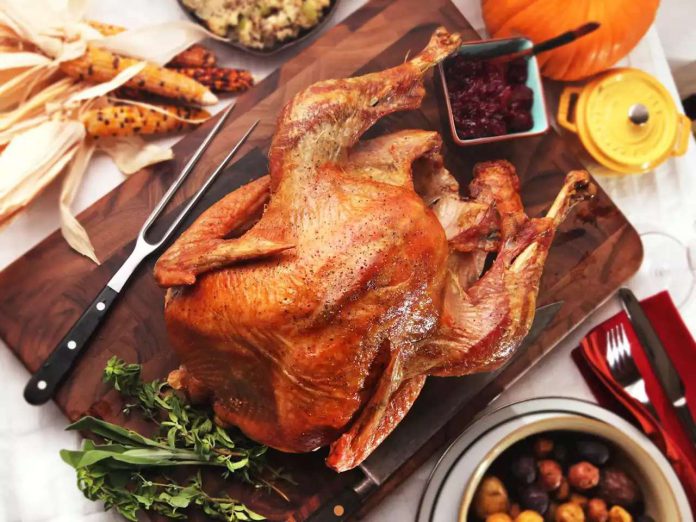 , here are some of the most memorable stories you shared.*
*Submissions have been edited and condensed for clarity.
Vicky Wasik
“Lots of gravy was a must on Turkey Day at our house. Mom reaches in the fridge for the milk carton (before the almost clear jugs). She adds it to the awesome pan drippings and we have plenty of gravy. Unbeknownst to mom, dad had poured his homemade eggnog into a regular carton and left it right up front. Yep, mom had made all that yummy turkey gravy with sweet eggnog! We went from lots of gravy to none. Everyone was super bummed—it even made my brother cry.” —Barb Osborne
***
“It was November 1988 and Thanksgiving was upon us. It was business as usual with a full house of people and my mom in the kitchen prepping and cooking. My mom never skipped a beat, she always had a smile on her face while she prepared the turkey and the various side dishes. There would be stuffing, candied yams, green bean casserole, cranberry sauce, rolls, and of course my mom’s famous homemade gravy. I had wandered into the kitchen to get myself another glass of wine and casually asked my mom if there was anything I could do to help. To my surprise, she asked if I could stir the gravy and keep an eye on it because she had something else to do. I stood there and stirred the gravy as instructed, but noticed that the consistency was not quite right—it just didn’t seem thick enough. This created an enormous amount of stress because I couldn’t screw up my mom’s famous homemade gravy.
“I recalled that corn starch can be used as a thickening agent and as it turned out, there was a box conveniently within reach. I quickly took action to remedy the problem. I didn’t bother finding a measuring spoon because I knew that adding a little at a time would be the best strategy. Stirring continuously and monitoring the thickness and consistency, I was still not convinced I had it just right.
“Finally, success. The perfect thickness—or so I thought. As my mom returned to the kitchen to check on the gravy, she tasted it and did not look pleased. The seven words I’ll never forget: ‘What did you do to the gravy?’ Just then, my sister, Jill, wandered by as I was explaining to my mom that I added a bit of corn starch to the gravy to thicken it to the right consistency. Jill asked with a smirk on her face, ‘How much corn starch did you add?’
“My reply: ‘I used the entire box.’
“Jill of course exploded in laughter, but my mom was not amused. The gravy was dumped in the sink and dinner was served. Throughout the entire meal, everyone asked if there was any gravy.” —Jerry B.
Vicky Wasik
“Several years back for a party of about 10, my mom was cooking the turkey and two side dishes all in the same oven. The turkey was on the middle rack and the side dishes below. She had discovered that she could put the two Pyrex dishes in the oven side-by-side and they fit perfectly… that is they fit perfectly when they Pyrex dishes were at room temperature. Time passes and it is now time to pull them from the oven. The heat had (predictably) caused the Pyrex to expand ever so slightly; it was just enough for them to get stuck in the oven. As she tried to slide one of the Pyrex dishes out of the oven, it shattered into what must have been a million tiny pieces. The roasted sweet potatoes now sat at the bottom of the oven amid a pile of shattered glass. Needless to say, we were one side dish short that Thanksgiving.” —
@thenickdyer
***
“It was the first year I was living with my then-boyfriend (now husband) and I really wanted to impress him with my cooking skills. We had this ridiculously small kitchen with the stove about one foot from the fridge, and we didn’t have a place for oven mitts so we hung them on the side of the fridge. For Turkey Day, I roasted a whole turkey and created three sides. While pulling one side out of the oven, the mitt started to smolder. I thought it had stopped and put the mitt to the side next to the fridge and went to talk with everyone in the living room. We are not sure how it started other than that mitt was smoldering. All of a sudden the fire alarm was going off and we came in to see the side of the fridge on fire! My boyfriend got out the extinguisher and sprayed it down, getting the turkey in the process. At least we had three side dishes to eat.” —
Jenn Pool
J. Kenji López-Alt
“I tried to do a repeat of the smoked turkey from the year before. Even though I was pretty amateur at using a smoker, it turned out amazing and got rave reviews. Not so much the case the second time around. After several hours of careful brining, preparation, and smoking, I was rewarded with a turkey that looked like it emerged straight from the fires of Mordor. Black as night, but not burnt… it was soot! Greasy, black, smoky soot! I carefully removed the skin, carved the bird, and presented it naked and ashamed. Still tasted great, but that was the last time I smoked anything.” —
Jen Church
***
“In an attempt to steam my turkey before cooking (thanks, Jacques Pépin), without a giant lobster pot, I rigged a large hotel pan with a perforated pan over two burners of my stove top and blanketed it with foil.

All was going well until I had to transfer the boiling hot 20 pound turkey to a rack and into the oven. Hot, wet, and slippery turkeys are NOT easy to lift, especially when all you have are a set of tongs and are standing on a step stool to make it happen! The turkey cavity slid down my arm, I immediately let go, and voilà! A slimy turkey landed on my kitchen floor.
“But…the 10 second rule meant, grab it, rinse it, and get it in the pan. We all figured anything that may have contaminated it would die off in the oven before serving! If I ever run into Jacques Pepin again, I’m going to ask that he emphasize the ‘when the turkey is cool enough to handle, remove it from the pot’ bit in his
Jacques Pépin Celebrates
Jenny McCoy
***
“My dad was stationed in Tehran, Iran, in 1962. We lived in a modern apartment building in the middle of the city, but like many homes in Iran, the walls and ceilings were made of a mixture of clay and straw. The night before Thanksgiving, we woke to a resounding crash. The kitchen ceiling had collapsed on our turkey as it thawed in the sink, spewing mud, water, and hay over the turkey, the sink, and the tiled kitchen floor. My mother resolutely rinsed the muddy turkey off as my father cleaned up the floor as best he could. My little brother and I found the disaster thrilling. Unfortunately, I don’t remember if we ate the bird, however I’m guessing that since turkeys were hard to come by, we did.” —Avery Cassell
J. Kenji López-Alt
“I believe it was Thanksgiving 2014. My husband had recently started working a new job and was given a frozen turkey from the company leading up to the holiday. He read that the best way to prep a turkey was to brine it a couple of days beforehand so we decided, free turkey, let’s try it out! He set up the brine and brining vessel, and, it being too large for our refrigerator, we put it out on our back porch figuring that it was cold enough (in Wisconsin, after all).
“Fast forward a couple of days and it’s the night before Thanksgiving. We also have a smoked ham that we’re planning to cook for the meal, so I figure that I’ll cook the turkey that night so there’s room in the oven for everything else I need to cook the following day. I go to remove the turkey from the brine and it just doesn’t quite smell right. However, I was a vegetarian for 15 years before I started eating meat again (which was a year or two prior to this Thanksgiving) and I certainly had never cooked a whole turkey before. I honestly had no idea what it was supposed to smell like…so I went for it.
“I dressed it up, stuck it in the biggest pan I had, and started roasting it in the oven. I pretty much knew immediately that something wasn’t right. But again, I had no history to go off of when it came to roasting a giant bird. I continue to let it cook, meanwhile texting my husband and my mom, ‘I think maybe something’s wrong with it? What’s a turkey supposed to smell like as it cooks?’
“Two hours in, our tiny apartment STINKS. I go to throw out the turkey and the smell is literally one of the worst smells I’ve ever smelled in my entire life. I took the turkey in its giant roasting dish out into our backyard and I’m trying to figure out how to get this hot, rotten turkey into a garbage bag all on my own (no easy feat, I might add). I honestly don’t even remember how I did it. However, I do remember going back into my apartment and realizing I had a major problem on my hands… the rotten turkey smell permeated every square inch of space in our apartment, and my in-laws were due to be there in approximately 12 hours.
“My husband comes home, gags on the smell of the place as he walks in the door, and we set to work opening every single window in our apartment and trying to air it out (while it’s in the single digits outside because; again, we live in Wisconsin and it’s the end of November).
“Somehow, we made it work. The next adventure came the next day on Thanksgiving—thankfully, we had that ham, and we were planning to use the oven in the vacant apartment above us, since our oven was full of other delicious baked dishes. Everything’s cooking and smelling great, the in-laws arrive at the house with a couple of items that they need to warm in the oven, and we’re all laughing about why we won’t be having a turkey for Thanksgiving. My husband takes our ham and heads upstairs to the vacant apartment to use the oven, only to return several minutes later… Our landlord has cut off all the utilities in the vacant apartment, so there’s no electricity, gas, or water in the apartment upstairs!
“We ended up eating the various sides, salads, and other dishes that we had finished—there was more than enough food, and all of it was very delicious. But that Thanksgiving (and that SMELL) will stay with me for the rest of my life!” —Auna D.
Featured Video

I Own This Silk Slip Dress in Five Colors And I...

All the new Love Island couples after that hellish recoupling