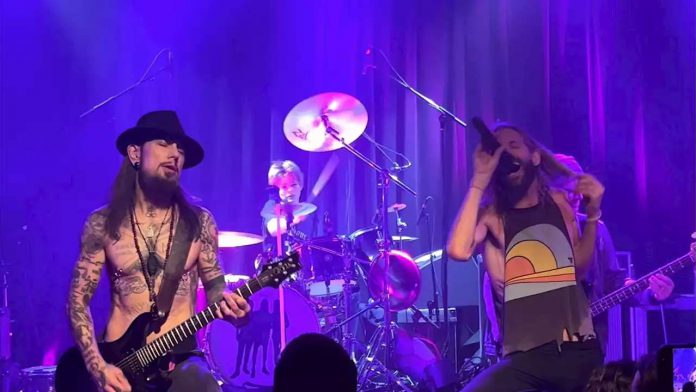 Dave Navarro
, and Jane’s Addiction bassist Chis Chaney quietly unveiled their supergroup NHC with a short set at the Ohana Festival in September, but they made their official debut with a full-length show at L.A.’s Troubadour on Tuesday evening.
The set began with nine songs from their in-progress album, including several they’ve already shared with fans like “Lazy Eyes,” and “Feed the Cruel.” The second half of the show moved to tunes from Hawkins’ solo career like “Louise” and “Range Roger Bitch.” It wrapped up with Queen’s “Keep Yourself Alive” and the David Bowie classics “Rock ‘n’ Roll Suicide” and “Ziggy Stardust.

Hawkins, Navarro, and Chaney were joined by Foo Fighters guitarist Pat Smear and Foos backup singers Barbara Gruska, who doubled as the group’s drummer when Hawkins moved away from the kit to sing lead. And for the finale of “Ziggy Stardust,” Taylor’s 14-year-old son Shane played drums. “He’s a little fucking bad-ass,” Hawkins told the crowd as he was walking onto the stage. “That is for goddamn sure.” His presence caused Taylor to change the lyrics to, “He took it all too far/But boy can Shane play the fuckin’ drums.”
Related Stories

Dark Phoenix Asks What If Sansa Stark Were A Targaryen?