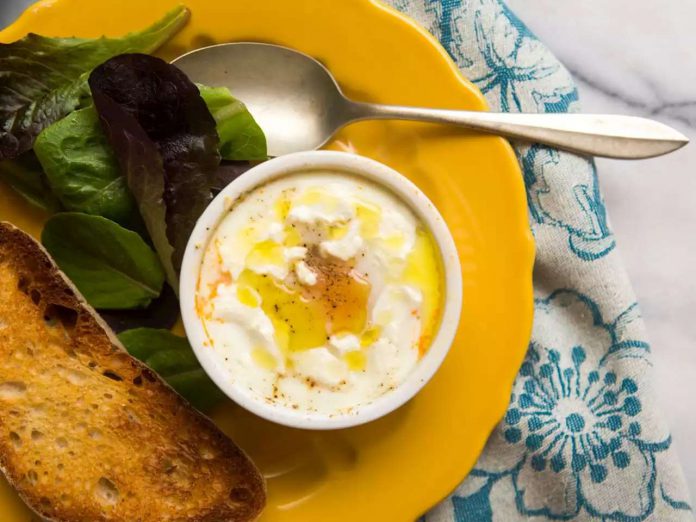 It’s a shame people don’t think to prepare eggs
en cocotte
way more often—it’s such an easy, elegant way of serving eggs. If you’re not familiar with it, “en cocotte” is a method of baking eggs individually in small vessels. Ramekins are the best choice for most home cooks, unless you have actual mini round
cocottes
, which are very small baking dishes with handles on the sides, like tiny Dutch ovens.
To make them, the eggs are slipped into the greased vessels, usually with fun flavorings above and/or below them, and gently baked in the oven in a hot water bath until done. “Done,” for me, is when the whites are mostly set and the yolks are still runny.
In most ways, they’re a lot easier than other egg dishes, as they come with none of the same technical challenges: You don’t have to master the art of the omelet, or perfectly poach an egg. The only thing you do have to get right is the timing, and I can’t help but think of a specific story when I think about timing eggs en cocotte.
During all four years I was in college, I made my pocket money by working as an extra, or “supernumerary,” as it’s more technically known, at the Metropolitan Opera. I’d march on stage as a soldier in
La Bohème
, as the king’s guard in
Aida
, and as a church boy in
Tosca
. Because I was a good average size, the company liked me for my ability to fit into many costumes, so they made me what was called a “cover.” Any time someone didn’t show up for work, which was most nights for those big productions, I’d go on in the absentee’s place.
In practice, that meant that several nights each week, I’d walk onto the stage at one of the biggest opera houses in the world—next to singers like Pavarotti and Domingo, and in front of an audience of thousands—without having ever seen half the sets or heard the music, nor with a clear idea of what I was supposed to do out there. If I had to stand in just one spot, that was easy, but sometimes it was a little more complicated.
One night they needed me to stand in for a toreador in the final scene of
Carmen
. I squeezed myself into a very tight bullfighter’s uniform and made my way down to stage right. When I got there, one of my fellow bullfighters looked at my costume and said, “Oh, you’re one of those cape toreros.” “What does that mean?” I asked. “You make a formation with some of the other guys, untie your cape, drop to your knee, and spread your capes into a carpet all at once so Escamillo can walk on it.” “When do we do that?” I asked, with nerves growing. “When the chorus sings
AAHHH
,” he told me.
I walked out onto that stage, the Sevilla set filled with a chaotic mass of singers pretending to be Iberian revelers, in a small panic, the only thought in my mind
How the hell am I supposed to know which AAHHH is the right one???
I think of eggs en cocotte as the egg dish that’s done “when the chorus sings
AAHHH
.

Which is to say, unhelpfully, that it’s done when it’s done.
No matter how I tried to devise a trick for nailing the doneness each and every time, I couldn’t come up with one. The obvious answer would be to use a thermometer, but stick a thermometer into an egg and you’ll likely break the yolk, which is
no bueno
. That means you’re stuck with the inexact task of gently jiggling the tops with your finger to feel how loose the eggs are. Determining the doneness, therefore, has an element of guesswork and intuition to it.
The good news, though, is that if the oven is set low enough, as I instruct in my recipes, you have a pretty big margin of error—much larger than it was in my restaurant days, when, at brunch, we’d crank cocottes out as quickly as possible in 550°F ovens, meaning that even 30 seconds too long could lead to a rock-hard yolk. With a little jiggle, paired with a little faith in your senses and instincts, the eggs will come out just fine. And if they’re underdone, just pop ’em back in the oven for a few minutes.
The one trick I
do
have that’s worth sharing is to put a divot into the center of whatever food you layer below each egg. That divot will help cradle the yolk directly in the center of the cocotte and prevent it from sliding to the edge, where, being closer to the heat, it would cook first. Centering the yolk guarantees that it’s just starting to thicken when the white around it is done.
Below are three flavors to get you started—I’ve linked to the recipes at the top and bottom of this page—but you can use just about any other accompaniments you can dream up.
If your experience is anything like mine was on stage, you’ll recognize the egg’s
AAHHH
moment as soon as it happens. Of course, in my case, the instant I dropped to my knee, my tight pants burst open along the entire seam…with more than 3,000 people watching. But that’s another story for another day.
Mushroom and Gruyère Eggs en Cocotte
These eggs en cocotte start with a base layer of mushroom
duxelles
and are topped with a coating of melted Gruyère cheese. The duxelles is made by sautéing minced mushrooms, shallots, and garlic in butter with thyme until they’ve released all their liquid and then browned and deepened in flavor. A splash of cream adds a silky richness.
Tomato and Onion Eggs en Cocotte With Goat Cheese
A thick tomato jam, made by cooking hand-crushed tomatoes with onions, garlic, and rosemary, sits under each of the eggs in this cocotte recipe. On top: crumbled fresh goat cheese, which softens in the oven’s heat, and a drizzle of fresh olive oil right before serving.
Crab Imperial Eggs en Cocotte
Inspired by the classic Maryland dish called Crab Imperial, these eggs en cocotte are served atop a layer of rich crabmeat tossed in mayonnaise with Dijon mustard and herbs. A dash of Old Bay on top finishes them off.
Get The Recipes:

Too Many Hot Chips A Recipe for Stomach Trouble?

The Flash Star Logan Williams’ Mom Says He Died of an...