Home Woman 5 Things to Look Forward to Now That the Webb Telescope Is... 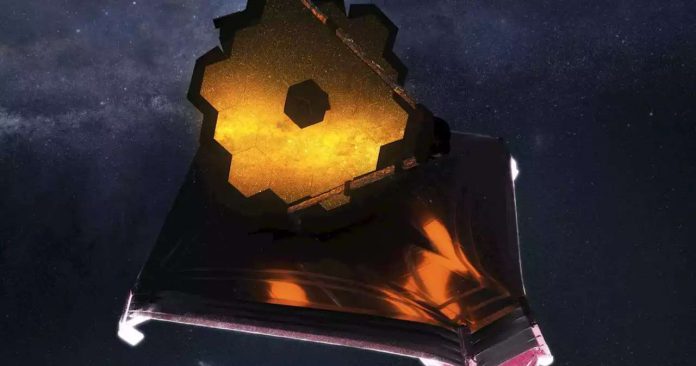 The life-hunting, image-grabbing, handiwork-inspiring time machine may be able to keep demystifying the universe for the next 20 years.

NASA artist conception of the fully deployed James Webb Space Telescope. Illustration: NASA Animator Adriana Manrique Gutierrez/Handout/NASA The James Webb Space Telescope has finished unfurling its huge primary mirror, ending a series of major deployments that took place over the span of two weeks.
”Today, NASA achieved another engineering milestone decades in the making. While the journey is not complete, I join the Webb team in breathing a little easier and imagining the future breakthroughs bound to inspire the world,” NASA Administrator Bill Nelson said in a statement on Saturday.
The massive $10 billion telescope was launched on Christmas Day. Since the full-size mirror was too large to fit inside its Ariane 5 launch rocket, scientists designed it in a way that allows its components to fold like rocket origami. Once it reached space, it began the precarious Transformer-like unfolding process. Webb’s main mirror will collect light from the furthest depths of the universe. In about two more weeks, the telescope will reach its final destination in deep space at Lagrange point 2 – a gravitationally stable point a million miles from Earth.
Engineering teams at NASA’s James Webb Space Telescope Mission Operations Center at the Space Telescope Science Institute in Baltimore monitor progress as the observatory’s second primary mirror wing rotates into position on January 8, 2022. Photo: Bill Ingalls/Handout/NASA But now that JWST has taken its final form, what can we look forward to from the largest and most powerful space science telescope ever deployed?
.
Going back in time Many astronomers who plan to leverage JWST’s superior optics describe it as a “time machine;” it’ll help experts study every phase of cosmic history from the beginning of the universe shortly after the Big Bang, capture images of the first galaxies to form after that event, and illuminate some answers on how stars are born and evolve.
.
The hunt for life is on JWST will be able to search for signs of life-supporting planets in the cosmos.

One way to study to do that by looking at what exoplanet atmospheres are made of using a technique called spectroscopy; components aboard Webb will enable astronomers to do just that, teasing out the light that passes through an exoplanet’s atmosphere, then spreading it out into a rainbow known as a spectrum.
A near-infrared photo of the Lagoon Nebula taken by the Hubble Space Telescope which NASA says is a nice sneak peek at what the James Webb Space Telescope, which is optimized for infrared light, will be able to show us. Photo: Space Telescope Science Institute/NASA, ESA, and STScI .
Impressive images The telescope will begin to collect data and its first images later in 2022. Those are expected to be released in June or July, forever changing the way we see and understand the universe. Moreover, Webb captures infrared light, detecting light that is invisible to us and revealing otherwise hidden regions of space, including distant corners of our universe.
.
Many more years of exploration Initially, the JWST was projected to be operational for 5 to 10 years. But according to NASA, the telescope will likely have enough propellant to support scientific operations for even longer to support over 10 years of exploration thanks to a super-precise launch. On Friday, NASA mission systems engineer Mike Menzel shared that thanks to the accuracy of the telescope’s launch and deployment, Webb should have enough propellant, roughly speaking, to operate “around 20 years.” After that, JWST will likely run out of fuel and slowly drift off course.
.
Lots more JWST-inspired creativity here on Earth The JWST looks bonkers, with a hulking primary mirror which extends 21 feet wide made up of 18 smaller hexagonal mirrors. They’re made from beryllium coated with gold, optimized for reflecting infrared light. From knitting to baking, the telescope’s iconic look has already lent itself to all sorts of crafts and creations. You can check out Webb-inspired handiwork on Instagram or Flickr.

The Chicks Sing National Anthem at the 2020 DNC Watch the...