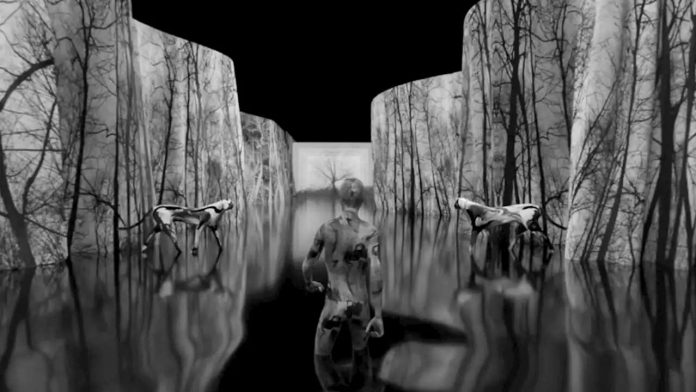 See All
Courtesy of Le Fresnoy
France’s burgeoning VR sector is exploring the hybrid territory between commercial applications, film festivals and contemporary art museums.
French producers and authorities are increasingly interested in VR and extended reality solutions against a backdrop of multiple recent developments – such as Facebook’s rebranding as Meta, Sony’s next-generation VR headset for PlayStation 5, Disney’s patents of “virtual-world simulator” tech, and an estimated $3 billion of virtual reality headsets sold during COVID-19 lockdowns.
One of the key French hubs for VR production is Plaine Images, a Hauts-de-France innovation park, based in Lille, in Northern France, which houses production companies, research centers, and three schools, including
– National Studio of Contemporary and Visual Arts.
Le Fresnoy produced
Faye Formisano
’s “They Dream in My Bones – Insemnopedy II,” one of 10 VR projects screening at Sundance 2022, within the fest’s New Frontier sidebar.
French helmer Bertrand Mandico (“After Blue”) and philosopher Emanuele Coccia (author of the book “The Life of Plants: A Metaphysics of Mixture”) were the project’s artistic supervisors.
The VR360 experience is about dream-geneticist Roderick Norman, who extracts dreams from skeletons. It is inspired by Virginia Woolf’s 1928 novel “Orlando,” a fantastic historical biography spanning four centuries, that was adapted to the cinema by Sally Potter in 1992.
Formisano, whose background includes textile design, dance and film directing, explains that she was attracted to this new project – her first VR experience – as a means of exploring her interest in immersive fantastic environments and creating a more physical viewing experience, compared to traditional cinema.
Variety
spoke to Formisano.
What do you like about VR?
Although virtual reality tends to be associated with dematerialization, I think it offers a more physical and tactile experience. It’s like a new set of clothes. The viewer puts on a physical headset and moves in a projected 360º space, creating a more immersive sensation of space and the body’s movement. We have to take care to avoid motion sickness. I think VR enables us to recover some of the visual techniques explored in silent cinema, focusing on gestures and expressions.
When did you first become interested in VR?
At the 2019 VR Arles festival where I saw “Gloomy Eyes,” narrated by Colin Farrell, which later won Best VR Experience at Annecy. That was the first time I saw the quality and immersive effect you can achieve with a VR project.

It starts with a lot of dark space and then we explore different fantasy levels, with a strong narrative and very good voiceover. I also really liked Jan Kounen’s VR project “7 Lives,” about a woman who throws herself in front of a metro train. We navigate between the metro and five to six dream spaces, exploring her memories. I realized that VR is a powerful tool to explore the unconscious, which is an area that fascinates me. For example, another key inspiration is the 1950s French TV series “La Clé des songes,” developed by Chris Marker and Alain Resnais, in which viewers sent in descriptions of the dreams that were then recreated as image sequences.
What attracted you to Virginia Woolf’s “Orlando”?
In my previous short film, “Insemnopedy I – The Dream Of Victor F.,” I was inspired by the work of Mary Shelley. I think that Frankenstein and Orlando are creatures invented by these two female authors who were great visionaries, in terms of exploring scientific developments and the human/non-human frontier and how these would impact our gender identities. Orlando hasn’t yet attained the mythic status of Frankenstein, but there have been important adaptations, including Sally Potter’s film, Bob Wilson’s 1993 stage version starring Isabelle Huppert, and the 2019 runway show by Comme des Garçons. I wanted to explore the dream trance of Orlando as she is visited by the three spirits – Chastity, Modesty and Purity – which are repressive forces who try to stop the transformation.
Did you film with 360º cameras?
No. We shot the images in an underground cave with a small Sony H5 camera and then created the 360º dimension in post-production. The black-and-white 2D images are projected onto suspended textiles which we move through, as if advancing through a timeline. One of the key visual challenges was when we enter the main character’s bones, entering a dream tunnel.
What is your next project?
I am now developing an interactive 3D project, using the Unreal Engine real-time 3D tool. The project is inspired by the event in 2018 in which the rain and the river turned red in the small town of Norilsk in Siberia, due to a spillage from Norilsk Nickel. I want to talk about the climate and establish a link with interior rain and the menstrual cycle. I think this subject still has great potential to be explored.
Are you optimistic about the future of VR?
VR is a hybrid experience that can create new connections. It’s a wonderful tool but can also be dangerous since it has almost a hypnotic effect.
optional screen reader

I Keep Passing Out on My Boyfriend in Bed

You can now buy medicine on Deliveroo and have it delivered...