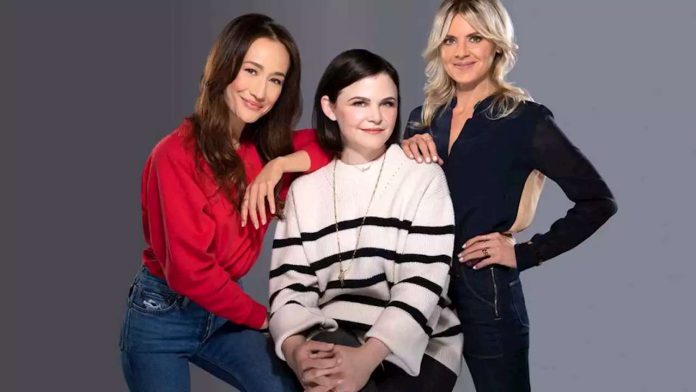 The single-camera comedy stars Eliza Coupe, Ginnifer Goodwin and Maggie Q as three 30something women who make big life changes after the death of their friend.

Eliza Coupe, Ginnifer Goodwin, Maggie Q, Tommy Dewey, JT Neal, Marcello Reyes
Creator:
Liz Astrof
The pilot opens on Coleen’s funeral, introducing us to three friends who loved her dearly enough to mourn her, knew her well enough to know she’d be horrified by the blue eyeshadow applied to her after death, and are close enough with each other to feel comfortable snarking about the makeup choices or predicting which of them might go next.
All three are shaken enough by the death to reconsider their lives. Cooking show producer Amy (Eliza Coupe) vows to be a more present mother to her young kids; Sarah (Maggie Q) quits her stressful medical career for a more laid-back one bagging groceries; stay-at-home mom Jodie (Ginnifer Goodwin) wants to get back into shape. (Though as Sarah correctly diagnoses, Jodie’s real problem is her oblivious oaf of a husband: “You know the only weight you have to lose is Dan, right?”)
The premise helps distinguish
Pivoting
from other hangout sitcoms, adding a sense of structure and direction as well as an edge of melancholy — which, as CBS’s recently departed
The Unicorn
also demonstrated, goes down pretty smoothly combined with a dash of irreverence. When the trio visit Coleen’s grave in episode three, they take turns reminiscing about her appetite for sex and giggling over the time she did something borderline inappropriate with a churro, and it rings truer and sweeter than any flowery platitude ever could have.
But as with most half-hour comedies about friend groups,
Pivoting
‘s core appeal hinges on its ability to convince us both that these people really seem like friends, and that we would like to spend time with them. On that front, it’s a solid success if not yet a soaring one. The leads trade quips in the snappy rhythm that, on scripted TV, conveys longstanding familiarity. Coupe is especially sharp, bringing some of the physical expressiveness and offbeat intensity that made her such a consistent delight on
Happy Endings
, though Goodwin and Q more than hold their own as well.

It seems a safe bet the chemistry between all three will only continue to grow stronger as the series proceeds and supporting characters like Amy’s patient husband Henry (Tommy Dewey) or Coleen’s widower Brian (Colton Dunn) come more to the forefront.
These deft comic performances, however, are let down a bit by the storylines. Sarah, Jodie and Amy’s predicaments go past relatable to over-familiar. There’s nothing very fresh about watching Jodie strain to zip up her skinny jeans, for example, no matter how gamely Goodwin throws herself into the character’s frustration. In the first three episodes sent to critics for review,
Pivoting
makes little effort to subvert the formulas it trots out, let alone to challenge the assumptions about mom guilt or body image or work-life balance underlying them.
Then again, few shows achieve their full potential this early. If these plot arcs feel a bit stale, fizzy banter and endearing stars go a long way toward earning some patience as
Pivoting
moves, we can hope, toward more interesting territory. And already there are signs of life. The centerpiece of the third episode is a weed-fueled outing, which isn’t an inherently original idea. But it turns into a showcase for giddy physical comedy as our heroines roll around in the grass and blink at hallucinations, and it all ends in a sloppy but heartfelt declaration of love.
It’s the loosest and silliest the show gets in the first three episodes, and also the most charming.
Pivoting
would do well, it seems, to borrow a page from its own characters, and remember to let itself screw around or screw up in pursuit of true self-actualization.
Read More About:

Rihanna Chris Rock and More Celebs Who Have Spoken Out About...