Home Woman This Is How Kanye West Really Feels About New Romance With Julia... 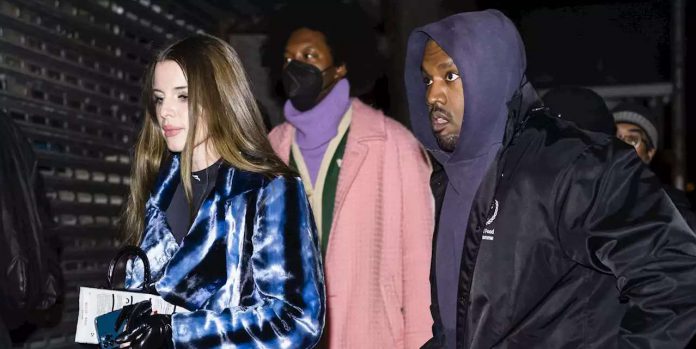 After reports of marital problems, a source told People magazine that Kanye West is trying to get back in Kim Kardashian West’s good graces. For Kanye, this may mean being more involved in Kim’s reality show.

By
Aimée Lutkin
Jan 9, 2022
Kanye West and actress Julia Fox’s new romance has seemed to move very fast over the last couple weeks, but a source told
Entertainment Tonight
that it’s not serious. Their first date was on New Year’s Eve in Miami, and just a few days later they traveled to New York to take in a play.
The play was followed by dinner where the couple were accompanied by a professional photographer. They then headed to a hotel where Fox was surprised with a fashion shoot and more photos, some of which were featured in an
Interview
magazine story. That might seem like a lot for the first week of dating, but West isn’t know for going half measures.
Despite how it might look to outsiders, a source says West has “expressed it’s not serious” between him and Fox, adding, “He’s not looking for anything right now and is really focused on his business.”
They continued, “Kanye and Julia hit it off from the very first interaction they had. He truly loved her energy and passionate personality and knew she would be a perfect person to bounce creative ideas off of.

He thinks she has refreshing energy and they are having a lot of fun. Kanye is always working on something creative and Julia is definitely his latest muse. He had a vision for her and that’s what inspired their date. He was bouncing off all these plans for his ideas, and she happily gave in and obliged.”
Fox is the right person for the moment, because another source close to the
Uncut Gems
star says she feels the same way about keeping things casual.
“She’s having fun and taking it day by day, but being a mom to her son is her number one priority.”
The new relationship comes after some very public pleas for reconciliation from West to his ex, Kim Kardashian. Kardashian is currently dating comedian Pete Davidson, but earlier this week another source told
E! News
that he has “not given up on Kim.”
“She’s the only one in his heart and he believes they are soulmates and will end up back together,” the insider said. “The other women that he is spending time with are a distraction. He likes the attention that he’s getting from them, but that’s all it is.”
From:

Everything You Need to Know About Powder Sunscreen According to a...

Hailey Bieber Says She and Justin Share This in the Shower