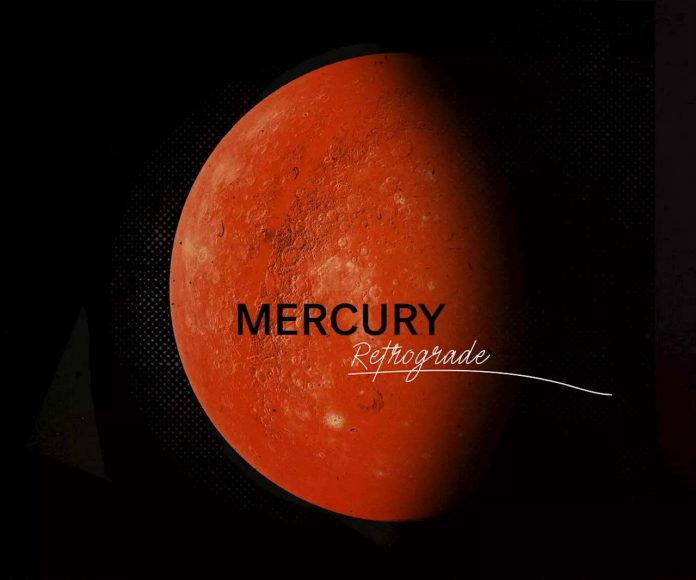 As Mercury retrogrades in Aquarius and Capricorn in January 2022, you’ll have to review your dreams and ambitions.

. Here’s how to get through 2022’s first Mercury retrograde.
RETROGRADE BASICS
An illusion results when two trains catch up to one another on parallel tracks; one seems to move forward and the other freezes in place. It’s the same with planets, or at least it was when ancient astrologers looked up at the skies to get a sense of what was going down. When planets go retrograde, the archetypes they represent go into a remission, reversal, or backwards climb. Call it a halting of progress, or a necessary retread to regain clarity, but one way or another, linear forward momentum is off the menu.
This round, Mercury joins Venus and Uranus in their retrogrades, though Uranus goes direct on January 18 for the first time since August 2021. As a slower-moving planet, Uranus deals with more collective shifts, playing a role in the evolution of money, consolidation of power, and the raging culture wars of the moment. But Venus and Mercury, the closest planets to the sun, move at a much faster clip, with consequences reverberating in the personal domain.
VENUS & MERCURY RETROGRADE
Venus retrograde in Capricorn
has gone hard since December 19 of last year, and is set to finally end on January 29. As the goddess of love, beauty, and artistry, Venus craves visibility and the ideal moment to make her debut. In Capricorn, Venus wants to be seen claiming success — often and especially! — at its most materialistic and obvious. Thrown backwards, the planet goes from the Nine of Pentacles to the Five, from
Casino
to
Reversal of Fortune
. This round coincided with a new variant, and a reprisal of all-too-recent chaos. The facade of a happy ending, a picture-perfect family Christmas, went sideways.
Where Venus craves visibility, Mercury thrives on action, as the mythological messenger and errand-runner of the Olympic gods. When this planet goes retrograde, the daily functions of life fall into disarray. It’s not that you shouldn’t do anything, it’s just that it all feels harder. You can still make the drive, but you have to shovel your car out of the snow first. The cruise becomes a slog. The backwards climb of both planets initiates a review of your endgame and the means to get there, of the fantastical (Venus) and the everyday (Mercury).
CAPRICORN & AQUARIUS
This year’s Mercury retrogrades pick up from last year’s positions in the three air signs — Aquarius, Gemini, and Libra — and then roll back into earth signs Capricorn, Taurus, and Virgo. Air signs deal with structures of communication; earth signs deal with systems of value. Not the most sentimental, or emotional, but no less triggering, as what you do, what you’re worth, and how you fit into the bigger picture all comes under harsh inspection. A return to the air sign retrogrades of 2021 forces final closure, no matter how much you say you’ve moved on with your life.

The January edition promises to be the most grueling, as Mercury crawls backwards through the two definitive signs of the last two years: Aquarius (January 14–26) and Capricorn (January 26-Feb 3). Remember 2020, when Saturn, Jupiter, and Pluto were all together in Capricorn, elucidating once and for all the failures of our state? In 2021, we saw Saturn and Jupiter move into Aquarius, and begin the conversation of building something new. With the progress of vaccinations, new technologies, and rising youth cultures came a new era of culture wars, moralistic backlash on both sides, and bizarre interpretations of “personal freedom.”
As Mercury works through these two signs on a micro scale, it’ll bring back all the difficulties we’ve experienced on the macro scale since 2020. With both Venus and Mercury retrograde in big-picture Capricorn, you can count on the global outlook to remain dire through the month, and for any plans that were too big to fail to suddenly meet their match. Ready yourself for a reunion with all those peak lockdown feelings of abandonment and orphanage.
, you’re on your own in the woods, and nobody’s coming to save you. The plans you made for 2022 have been put into peril. What do you lean on to survive, to endure, to keep going?
IT’S ALWAYS DARKEST BEFORE THE DAWN
2022’s astrology is certainly less jagged than the works of the previous two years, and come February, March, and especially April, there’s a sense of a creative and spiritual awakening. This retrograde period then acts as a face-off with the past, a moment for release and culmination. Now is when you collect and synthesize the wisdom from the harder months to ready yourself for anything. What have you learned about taking care of yourself when all hell breaks loose? What dreams and goals remain when the entire world has shut down? Aquarius and Capricorn situate you in a global ecosystem. How has your path, and your sense of place, evolved since the end of 2019?
While Mercury slows down, other archetypes speed up and come alive. Uranus, planet of change and revolution, goes direct in Taurus on January 18; Aquarius season launches a new sense of forward momentum on January 19, and Venus goes direct on January 29. Treat this retrograde period as a moment of review, to realign your vision for 2022. What’s in the way of making your capital “C” career happen? How does what you do contradict your values? Which aspects of your life haven’t been working, and can’t be faked any longer?
Embrace this retrograde as the coldest and quietest period of the winter, as the moment when everything stops and you realize what you want and need. The time to make your dreams come true is fast approaching. Now’s the moment to clear out the nightmares. See you on the other side.

What Are the Symptoms of Having a Weak Pelvic Floor? We...

Our ultimate edit of the chicest bikini options that fit and...