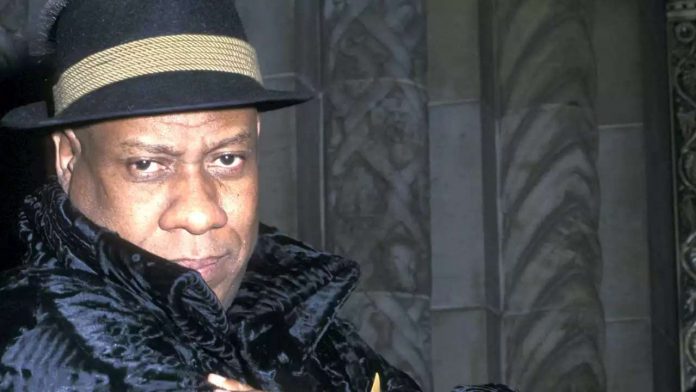 Writer Zach Stafford reflects on A.L.T.’s passing and what it signifies for Black, queer folks.

The Gospel According to André Leon Talley
. “I wake up and think about it almost every day.” This quote was in reference to the fact that many of his closest friends, such as Karl Lagerfield and Yves Saint Laurent, were now gone and he was partnerless living upstate. And this is where he, for me, began to make it clear that his life was a beautiful warning to boys like us.
Karl Lagerfeld and André Leon Talley during a Chanel event in 2005.
Jemal Countess/WireImage for CHANEL
Don’t get me wrong: A.L.T. was loved and he also loved himself. This warning doesn’t diminish the love that was his life. Rather, it is one that tells us we can, and we should, have even more love than he felt. But capitalism, the patriarchy, and even fashion are systems that can’t and will never love us back.
A check will never hold you when you’re sad and a piece of clothing will never be the thing you call for words of encouragement in your darkest moments. And when you’re Black, these systems were never built to hold you in the first place. Even just existing in them doesn’t radically change them. To borrow from what Audre Lorde once wrote in 1984, “the master’s tools will not dismantle the master’s house.”
What A.L.T.’s life now shows us is the ways in which we as Black, queer folks existing in these spaces can be a constant contradiction. That you must acknowledge how your life, your body just being at the upper echelon of fashion can be a revolutionary act, but how that also isn’t always enough to truly change the entire system.

Or that the system will ever fully embrace you for more than a season. It’s there when you realize that reality can bring its own flavor of pain that mixes with the remnants of what is already there. But this is still something worth fighting for.
When I look back at my younger years when I overly romanticized (and rightfully so) the life of A.L.T., I realize that it was me hoping that my Black, queer body could find some space in the world where I could just be. When the world rejected me as I grew up, I somehow told myself that success or work will prove to them how worthy I am – that if I just do more, go bigger, make even more money, that they then will love me like I love them. But the work of real change in the world actually doesn’t begin in a job or in the world itself. It really starts in a much simpler place: With loving yourself. Through that love you can find that power to begin changing the world. That’s what A.L.T.’s life now shows us.
André Leon Talley in 2006 in NYC.
Joe Schildhorn/Patrick McMullan via Getty Images
I know that A.L.T. felt tremendous amounts of love throughout his life — even if never romantic, at least that we know of – because it’s apparent in his work and the communities he built that continue to mourn his passing. It’s present in the fierceness he fought for Black people to be seen as beautiful in spaces he knew fought hard to not see it. It’s present in all the incredible stories circulating these past few days, whether it be

Should I send my child back to school in June?

Elisabeth Moss Is a Terrifying Shirley Jackson in Shirley