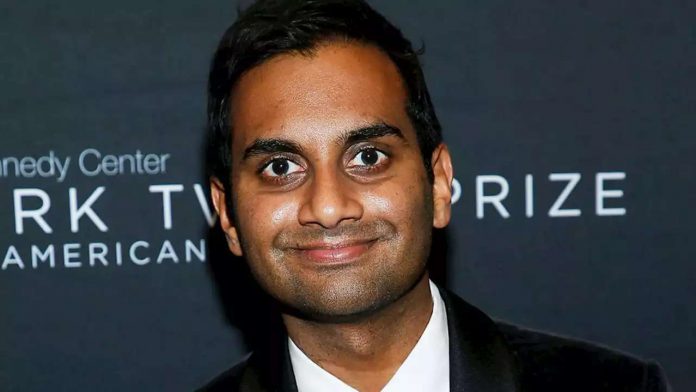 The comedian and mind behind ‘Master of None’ opened up on a new episode of ‘Comedy Gold Minds With Kevin Hart’ about ambition, awards and his mental diet.

Netflix’s ‘Master of None’ Season 3: TV Review
“Everyone thinks about their diet and what they eat [and] at a certain point, it’s also about thinking about your mental diet and what you’re putting in your head,” continues the 38-year-old. “Whether it’s looking at the same four websites, constantly checking
The New York Times
50 times a day. At a certain point, that’s not really helping.”
Though he doesn’t specify why he switched up his lifestyle, Ansari retreated a bit from public life following the 2018 publication of a controversial article on the now-shuttered website Babe.net. In the article, an anonymous woman called Grace detailed a date she had with the comedian, one she claims ended with sexual misconduct. The piece inspired a wide range of fiery opinions amid a cultural reckoning happening with the #MeToo movement. Ansari apologized and later addressed the swirl in a 2019 special titled
Right Now
With the new special,
Nightclub Comedian
, Ansari has already snagged a slew of headlines for jokes about Aaron Rodgers and Nicki Minaj and the respective dust-ups surrounding their stancees on the COVID-19 vaccine. Of Rodgers, he jokes, “He read some articles. He got skeptical. He did some research. Are you stunned he came to the wrong conclusion? Did you really think he was gonna crack the case? Did you think Fauci was gonna be out there, like, ‘I just got off the phone with Aaron Rodgers?’ This poor guy. It’s like we’re all in high school, and we’re making fun of the quarterback for doing bad on the science test.

Like he’s doing on the stand-up stage on tour and in a new Netflix special, making jokes and creating content seems to be a sweet spot for Ansari. He tells Hart that he hopes to continue both and possibly do more seasons of his critically acclaimed series
Master of None
. The Netflix series pivoted amid the pandemic and featured a storyline for season three centered on Lena Waithe’s character Denise and her relationship with girlfriend Alicia (Naomi Ackie), with Ansari behind the scenes as writer and director.
“I’m really happy where I’m at now,” he says. “If I can just kind of keep getting to do stand-up every now and then, and put out specials and do tours, and then in between that, work on writing and directing projects that I’m passionate about, whether they’re films or other seasons of
Master of None
or whatever, that would be a dream for me. I’m all good.”
That dream also includes a family. “I’ve done stuff where I’ve gotten the awards and all this stuff, and I’ve done stuff where maybe that didn’t come. But at the end of the day, what’s left is the work you’ve made, and if you feel good about it, then you’ve won. That’s what I’ve realized. I just want to be creatively fulfilled, and I want to follow your path and have some kids and have a family and all that,” says Ansari, who reportedly got engaged late last year to girlfriend Serena Skov Campbell. “And that’s enough.”
Comedy Gold Minds With Kevin Hart
premieres tonight on Laugh Out Loud Radio channel 96, and the full episode can be heard

Will your child get free tutoring to catch up on their...

Cardi B Sits Down With Senator Bernie Sanders For A Campaign...