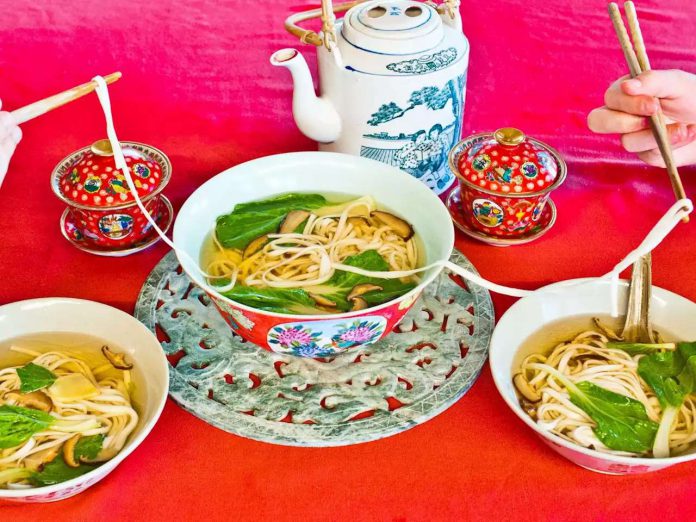 8 dishes to bring you daji dali—good luck and great prosperity.

tradition
across most of Asia to hold a lavish feast to celebrate the lunar new year, which falls this year on February 12. In China, festive red lanterns, ear-splitting firecrackers, auspicious door decorations, and new clothes and haircuts are all part of the celebrations as families gather the evening before to see out the old year and usher in the new. For many, though, enjoying a special meal with loved ones is the most important element of all.
With multiple courses and an abundance of special-occasion foods, sweets, treats, and extravagant dishes, the feast differs according to each family’s customs and the local cuisine. But one certainty is that the meal will be heavy on foods with a symbolic significance, cooked and served to bring good fortune to the year ahead. If you’re looking for a positive start to the Chinese New Year, these classic dishes will be sure to bring you
daji dali
—good luck and great prosperity.
Jiaozi (Dumplings)
In winter, a steaming cauldron of boiling water sits on every stove, ready to cook
jiaozi
at a moment’s notice. Today, making dumplings together at Chinese New Year is a tradition shared by almost every Chinese family around the world, but the practice has its roots in China’s north, where the wheat used in the tender dumpling skins (
jiaozi pi
) was once a more commonplace staple than rice. For some, it’s a matter of principle to make and roll those dumpling wrappers by hand; for others, it’s the gesture that counts, so it’s not unusual to buy dumpling skins from the local noodle shop, where round and square wrappers alike are sold by weight.
Just as dumpling wrappers vary greatly from home to home, virtually everyone has their own recipe for the filling, or
jiaozi xian
. Ground pork is the most popular ingredient, often blended with shrimp, savory Shaoxing wine, white pepper, and piquant ginger; it can also be mixed with white cabbage, sesame oil, soy sauce, and scallions. For the small but growing number of vegetarians in China, a combination of finely chopped Chinese white radish, leeks, five-spice tofu, shiitake mushrooms, and cooked glass noodles makes a rich and colorful alternative filling. Once filled and pleated, the dumplings are boiled for just a few minutes, until cooked through, or steamed and/or pan-fried as potstickers (
guotie
).
Any leftovers are typically frozen and kept in reserve for family and friends who might visit over the festive period. Dropped, still frozen, into the endlessly boiling pot on the stove, the jiaozi are transformed into a meal in about 10 minutes. On a cold night, there’s nothing that quite matches a bowl of dumplings, the steam rising as you dip them in dark, malty Zhenjiang vinegar or smoky, chili-laced Shanxi aged vinegar, and slurp them down.

Dayu Darou (Whole Fish or Meat)
The Lunar New Year meal will almost always include
dayu darou
—literally “big fish and big meat.” The phrase is used to describe any lavish feast where animal proteins play a central role, as opposed to day-to-day eating, in which meat and seafood are used much more sparingly.
A whole fish lends an impressive appearance to the dinner table, but fish is also symbolic of abundance. The Chinese phrase
you yu
, literally “to have fish,” is a pair of homophones can mean “fish” or “surplus.” As you eat the fish, you may therefore wish your friends
niannian youyu
—may you have abundance year after year!
The fish is usually steamed whole in a style commensurate with the region of China in which it’s being served. In Hangzhou, it might be
xi hu cu yu
(West Lake vinegar fish), carp that’s steamed and then drenched in an unctuous sweet vinegar sauce the color of molasses. In southern China’s Guangdong Province, the fish may be served simply, drizzled with soy and sesame oil and topped with a tangle of ginger, chili, and shallots, or with a more intensely flavorful topping of ginger, black beans, and cilantro. The fish might even be deep-fried whole, like the extraordinary Suzhou squirrel fish (
songshu yu
)—served in a sweet-sour sauce, with the flesh cut in such a way that it springs outward like the fur of a squirrel when cooked, while the head and tail are left intact.
Get the recipe for Chinese Steamed Whole Fish With Fermented Black Beans and Garlic »
Lawei (Cured Meats)
In the winter streets all over China, flayed giant fish, ducks, and skeins of Chinese sausage hang from racks and poles, drying and curing in preparation for Chinese New Year, and echoing ancient sacrifices that took place in the dying days of the year after winter solstice. Historically, during
layue
, the 12th lunar month, year-end animal sacrifices of pigs, poultry, and fish were made to the gods. All that was left after the gods were finished needed to be saved, leading to the development of techniques for meat-drying and preservation.
Even in modern-day China, many families continue to prepare their own, hanging the meats from window ledges and washing lines like macabre New Year holiday decorations. The result is salt-cured, air-dried pork (
larou
) with the salty, funky intensity of the best Spanish hams; gamy, dense bites of preserved duck and chicken (and their hearts); and other rich sausages, all designed to be served and eaten as cold dishes, much like a French charcuterie plate.
Chun Juan (Spring Rolls)