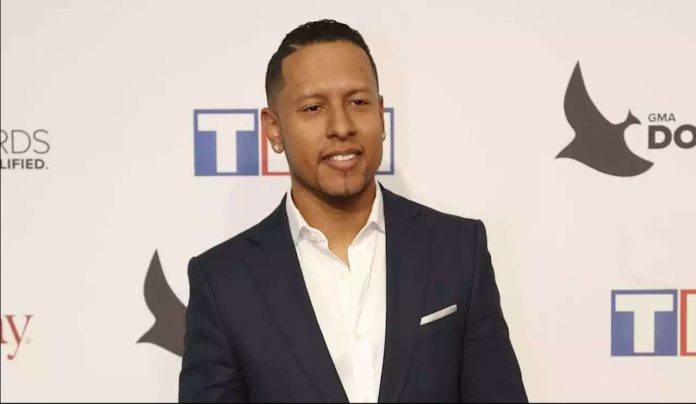 Gawvi, an artist and producer in the Christian hip-hop community, has been dropped by his label, Reach, and from an upcoming tour in light of a developing scandal involving his allegedly sending un…

Gawvi
, an artist and producer in the Christian hip-hop community, has been dropped by his label, Reach, and from an upcoming tour in light of a developing scandal involving his allegedly sending unsolicited sexually explicit photos to women.
“Due to behavior that is inconsistent with our core values, we have ended our professional relationship with GAWVI,”
Reach Records
said in a statement Monday afternoon. “This was a tough decision for us because of the level of complexity and because we invest in our artists not just for their talent, but also as brothers and sisters in Christ. This is something we have been processing for over a year and have wrestled with what would be the right way forward. New details that were provided made us realize today’s decision was necessary.”
A package tour involving the entire Reach roster, “We Are Unashamed,” had been announced five days earlier. The tour will continue in March and April sans Gawvi, with the label’s remaining artists —
Lecrae
, Andy Mineo, Trip Lee, Tedashii, 1K Phew, Wande, WHATUPRG and Hulvey.
Gawvi had announced he was getting divorced on his Instagram account Saturday, saying he and his wife had separated back in 2020. While divorce remains a contentious subject in Christian music, the announcement kicked off a firestorm of allegations that soon made it clear that news of a marital split might be the least of his problems in the gospel world, and that there wouldn’t be much credence to his promise that “there is no scandal to gossip about.”
His divorce announcement was shortly followed by a tweet from a visual artist who identifies herself as Cataphant. “
Years ago I made album artwork for Gawvi,” tweeted the San Diego-based designer, also known as Catalina Bellizzi-Itiola. “
For my next project I’m going to make a collage of all the unasked-for dick pics he sent to women while he was still married.

When another user admonished the designer that “dragging people in public is not scriptural,” and that any admonishment of Gawvi should have been kept to church circles, Cataphant responded, “Do u think I’d be doing this if he actually listened to his circle? They did address it, he cut them all off. He’s got like 3 friends left.” Cataphant also had exchanges on Twitter with other users who claimed to have had or know of similar incidents involving the rapper.
The website Rapzilla posted a
detailed story
that originally included a series of TikTok videos from Gawvi’s estranged wife, Brianna Azucena, that the article said “seem to allude to infidelity, trauma, and healing,” but the TikTok account was made private after the story was posted.
Gawvi could not be reached for comment. The artist’s Twitter account has been deleted, and his Instagram page now includes no material newer than early December.
Reach’s statement concluded, “We also want our actions to be a reflection of love, care, and concern for those who fail and those who are affected by our failures. Each of us needs God’s grace and we invite you to pray for the families and individuals whose lives are being impacted. This is not a chance to throw anybody away. We continue to hope for restoration to be the outcome.”
Gawvi, 33, has won or been nominated for several Dove Awards, gospel’s highest honor. He was signed to Reach that same year and released four full-length solo albums, the latest of which was 2021’s all-Spanish-language “Noche Juvenil,” along with three EPs. His peak to date on the Billboard Hot Christian Songs chart was the No. 25-charting “Fight for Me,” featuring Lecrae, in 2018; the song won a Dove in the rap/hip-hop category the following year. Two of his releases have made the top 10 on Billboard’s Christian albums chart.

Don’t Give Up on Offices Quite Yet

Seems Weird Not to Mention That the Person You’re Quoting Is...