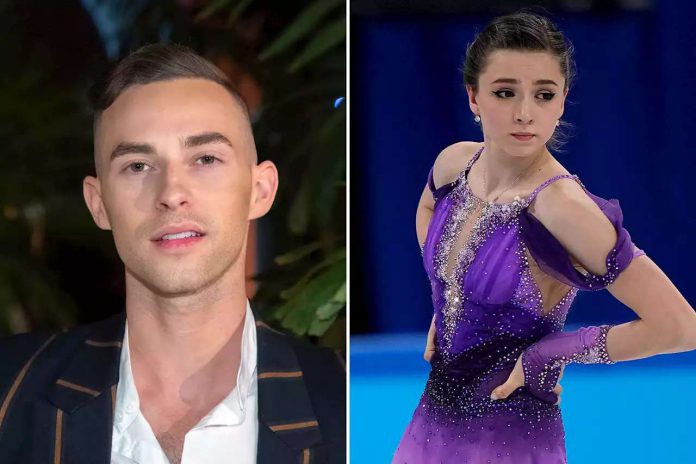 “It’s just such a dark cloud hanging over the whole competition,” says Rippon, who won a bronze medal at the 2018 Olympics

previous incident
.
What was the energy like as you left the stadium before Valieva’s skate — and what’s it been like in general as this scandal has unfolded?
The general mood is, everyone seems pretty angry. It just feels so bizarre and unfair. I don’t think anyone is blaming Kamila specifically, because she’s just a 15-year-old girl — she’s the youngest girl in the competition.
That’s what’s really devastating in this situation. A 15-year-old doesn’t get heart medication for angina by herself. She’s going to need an adult to do that. And so that means that there were adults who really failed her and led her down the wrong path. Also, when they tested her sample there were three different heart oxygen medications in her sample, so it does make one believe that this is some sort of routine or regiment that she’s been put on by someone. If we find out that Kamila didn’t even know what she was taking, I wouldn’t be shocked at all. This is exactly how organized doping works: You’re on a schedule, you’re put on different medications, and you have negative test after negative test until you mess them up. And then you get caught.
The positive test came from a sample taken six weeks ago, do you have any idea how it only come out now?
No, everyone’s kind of scratching their head, like, how did that happen? But I do know the sample is from when she skated at Russian Nationals, it’s from December, and it was shipped to the World Anti-Doping Agency, a testing lab in Stockholm. [According to a statement from the Russian Anti-Doping Agency, the lab] said they were backed up with Covid cases, just understaffed and everything, and it took a few weeks to get the results of the test.
It probably would be better handled if there was no Covid. These laboratory back-ups, it’s kind of the nature of the beast right now. Nobody can really predict how long things take, and in an ideal situation she would’ve found out really quickly about this test. I know in part of her ruling it was that she didn’t have enough time to seek legal counsel. But, a positive test is a positive test. And in her hearing, they didn’t deny it, but they argued along the lines of: She accidentally may have had her grandfather’s medication or something. It just gets more bizarre and more bizarre. I mean, that’s just now how it works, especially when you have other similar drugs [in your system] — three different oxygen-type drugs, two of them legal [to take during the Olympics], one not. It makes it feel like this is some sort of regimen.
Why do you think the IOC has allowed her to skate under these particular conditions? And what about that process has frustrated you most?
That she’s allowed to compete — I have no idea. I know it’s a difficult position that she’s been put in because she is so young. And the Court of Arbitration [of Sport] ruled that 15 is too young to, basically, have to suffer the consequences of this. They treated her as a young child, and they feel that her not being able to skate because of this would be too traumatizing and would do irreparable harm to her mentally. But this does irreparable harm to the Olympics, to sports in general, and the anti-doping movement. And if they were really worried about irreparable harm, they should have set her up with counseling and gotten her out of this incredibly toxic environment that it is right now.

Yeah, the pressure of the Olympics is enough already, but then to be 15 and at the center of an international doping scandal probably isn’t good for your mental health either.
No, probably not. I mean, I wouldn’t know, but I couldn’t assume it is.
When it comes to discussions of this scandal in the media and Olympic coverage, how do you think is the best way to appropriately scrutinize what’s going on while steering clear of outright bullying a teenager?
I think that the line is that a positive test means you shouldn’t compete. So where do we direct our anger and our blame? We look to see who the adults in charge of her are. We look to see the people that got her into this situation, those who are supposed to have her best interests at heart. I think that’s where we start looking, and if that leads to the coaches, the doctors, or family, or whatever, that’s where we should be focused.

Because the fact of the matter is, it’s devastating and it’s heartbreaking that this happened to her. But this isn’t something that’s up for debate, whether she should compete or not. The answer is no. But if we really want to start discussing this really complicated situation, I think it starts with how did she get there? And it starts with those in her team.
Considering Valieva is going to keep skating, how do you hope the rest of the competition, and the coverage, play out?
I hope the situation becomes less of a distraction, which it absolutely will not be. Tomorrow, she will probably be in the top three and then there will not be any sort of medal ceremony. That’s robbing two other women of the opportunity to be on a podium, and then leaving one in suspense of how this case will end up, and it probably won’t be settled for a few months — most likely with Kamila being stripped of her team medal and her place in the ladies event.
Sha’Carri Richardson argued
there was a double standard at play with her ban from the Summer Olympics last year for marijuana use, and Kamila still being allowed to skate. Do you think there’s something to that?
The differences between Sha’Carri and Kamila start with the differences between how the U.S. and Russia deal with doping. There’s a zero-tolerance policy in the U.S. and with USADA and a positive test means you are out of competition. Sha’Carri tested positive for marijuana and the circumstances are so stupid and unfortunate, and whether marijuana should be on the doping list is a completely different subject, which I don’t think it should be — it’s not a performance-enhancing drug.
But as soon as she was told that her test was positive, the next day she was on the news apologizing and taking accountability because that’s how it works in the United States.

This test of Kamila’s was done by the Russian Anti-Doping Agency, and they dealt with the case by suspending her and lifting the suspension right away; and then the ruling was done by the Court of Arbitration for Sport. Sha’Carri never got that far because USADA just banned her from the competition right then and there. So these cases are completely different — they were not ruled by the same governing bodies.

But to the point that Sha’Carri is bringing up, I do think it’s a valid question: Would this have been different if Kamila was Black? Racism is still in sports, it’s everywhere. This certain circumstance doesn’t highlight racism in sports, but it’s worth the conversation. It also highlights that what Sha’Carri went through was totally unfair. And I think it highlights how we need to really get marijuana off the banned substance list. Because for someone to miss out on an opportunity because of marijuana and for another person to be 15 and allowed to compete on an angina medication is a totally different story. That’s what we need to be talking about.
The official investigation into Kamila’s positive test is still pending, but what kind of consequences do you think there should be, beyond stripping her of her medals?
The Russian Olympic Committee needs to be severely punished. They received a slap on the wrist, they’re still here. They compete under a different flag, they still have doping violations, and they’re still dirty fucking cheaters and it’s so annoying! I think that they should be completely banned from competition.
That being said, I think that’s so unfair for all of the clean athletes from Russia. It’s not fair to just paint a broad stroke across every Russian athlete. I think that they should think about letting those athletes compete independently of the Russian Olympic Committee and maybe qualify through different competitions, but under severe stipulations, like having to train in another part of Europe or in North America, and undergo random testing by the European or North American doping agencies that have a higher standard and a zero-tolerance policy. So I think it’s worth that conversation. But this should be the last straw — a doping violation while serving a sentence for a state-sponsored doping program.

These are the 30 people changing the face of fashion in...

In the Market for a Mattress? Consider One of These Editor-Approved...