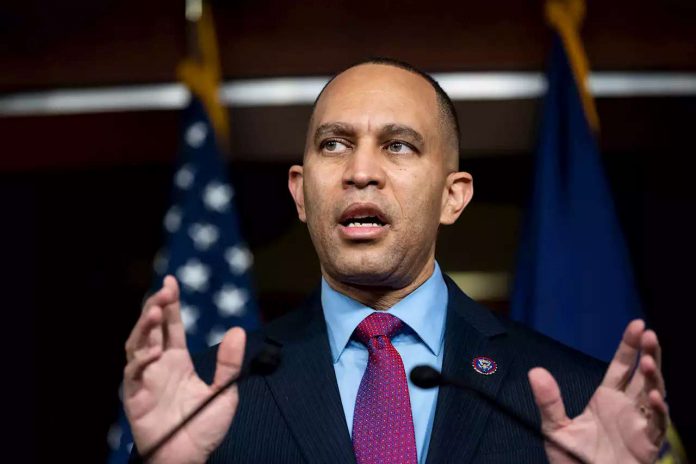 House seats are on the line as progressives challenge incumbents in a string of contested Democratic primaries, part of a broader struggle over the party’s future

Singer Paulette McWilliams on Her Years With Marvin Gaye, Michael Jackson, and Steely Dan
“It’s important to support effective legislators for delivering for the American people in partnership with the Biden administration,” Jeffries says. “We want to support common-sense members who are delivering for their districts and helping advance the Democratic agenda to create jobs and cut costs for their constituents,” adds Rep. Josh Gottheimer (D-N.J.), another Team Blue PAC co-founder.
The
primary challengers and their allies see things differently
— and think Jeffries and his allies should take a different tack in protecting their majority. “It is extremely alarming that critical resources from Democratic Party leadership are going to protect incumbents from having to face any competition in deep-blue districts instead of protecting the swing seats we’re in danger of losing in November,” says Waleed Shahid, the communications director of Justice Democrats, the left-wing group that supported Rep. Alexandria Ocasio-Cortez (D-N.Y.) and other successful progressives in their House primary runs.
These primary endorsements are the latest front in the fight over the future of the Democratic Party. The struggle experienced a brief armistice last year as Congress’s left flank worked closely with the White House and Democratic leadership to push the
Build Back Better
Act, the Democrats’ sweeping domestic agenda, over the finish line. The bill passed the House with nearly unanimous Democratic support, but stalled in the Senate, heightening an already-present conflict. Now that primary season is here, House seats and political power are on the line.
Team Blue is on one side of this conflict. Jeffries
launched
the effort with Gottheimer and Rep. Terri Sewell (D-Ala.) last June. The trio is not a monolith: Jeffries is a member of the Congressional Progressive Caucus, while Gottheimer and Sewell are members of the business-friendly Democratic coalitions. Sewell and Jeffries are also members of the Congressional Black Caucus, which has
taken umbrage
to primary threats mounted against its members.
The lawmakers united in an effort to provide resources to the increasing number of House Democrats who face primary challenges — in particular, from the left. That circumstance faces the five incumbents who received endorsements on Wednesday: Reps. Shontel Brown (D-Ohio), Danny Davis (D-Ill.), Carolyn Maloney (D-N.Y.), Donald Payne Jr. (D-N.J.), and Dina Titus (D-Nev.). Davis and Maloney face opponents backed by Justice Democrats; Brown faces a rematch from Bernie Sanders ally Nina Turner, who had the support of the left-wing group during a special election to fill the seat last year.
Jeffries says he doesn’t object to primary challenges — he
launched one
himself on the way to winning his Brooklyn-based House seat. And he insists the PAC’s efforts are not strictly a matter of ideology: Maloney is a member of the Congressional Progressive Caucus, just like he is. Its purpose, Jeffries says, is to protect incumbents’ records from “being distorted” by “the hard-left.” He uses the term to separate himself from his detractors, who see actions like these endorsements as evidence he’s not on their side. “Why are members of the hard-left targeting progressive members of Congress, and then trying to act as though they’re engaging in some ideological contest against the rest of us?” Jeffries says.

(It’s worth noting, of course, that Team Blue PAC isn’t defending any incumbents from challenges from the right.)
The primary challengers and their allies do not see any distortion. Democrats’ failures to pass their bold agenda, they say, is proof that the party remains tethered to corporate influence and centrist proclivities. Some of that is easily observed in outward positions lawmakers take, such as Sen. Joe Manchin’s (D-W.V.)
objections
to the Build Back Better Act. But some of it is measured by a lack of vigor — a sense that lawmakers, even if they put their names on the most progressive legislation, roll over toward the moderate mean too easily. “I agree with what Rep. Jeffries said in 2011 after his third primary challenge against an incumbent Democrat: Some incumbents have had decades to make a difference,” says Justice Democrats’ Shahid. “It’s time to move in another direction.”
There’s also the matter of corporate campaign funding, which all of the Team Blue PAC-endorsed candidates accept. The PAC itself is
primarily financed
through corporate PAC money, and I asked Jeffries whether that fact proves his detractors’ point.
“Is there any evidence that their voting record and advocacy has been influenced by people who have contributed to them?” he says, pointing to their voting records. “Somehow we’re supposed to theoretically believe that they’re being unduly influenced because they’re raising money from employee-supported political action committees.”
Primary challengers dismiss that assessment. “Carolyn Maloney was always going to have the support of the corporate establishment — that’s a given when you’re running for your 15th term in Congress,” Rana Abdelhamid, who’s running against Maloney, said in a statement. “Democratic leadership should be spending every dime of our party’s resources on helping frontline incumbents in swing districts and protecting our majority instead of coming into a deep-blue district that is clamoring for new leadership,” says Kina Collins, who’s challenging Davis.
One notable omission from the PAC’s inaugural slate: Rep. Henry Cuellar (D-Texas), a centrist Democrat facing a primary challenge from immigration attorney Jessica Cisneros. Ocasio-Cortez
stumped for Cisneros in Texas last weekend
, and upbraided Cuellar for helping to railroad the Democratic agenda — the opposite, in other words, of what Jeffries says Team Blue PAC rewards members for. “No specific reason,” Jeffries says when I ask about Cuellar’s exclusion, noting a desire to “start with a modest list of members who’ve been working hard as part of the team.” Nothing to do with the
recent FBI raid
on Cuellar’s home and campaign headquarters? “I think people shouldn’t prejudge the outcome of an investigation that hasn’t been completed,” Jeffries replied.
Team Blue PAC’s endorsements arrive at a moment when Democrats have stressed unity as they head into what’s expected to be a challenging midterm election. So far, progressive lawmakers have shied away from endorsing primary challengers: A notable exception is Rep. Cori Bush (D-Mo.), who

‘The Humans’ Reminds You That Every Family Holiday Dinner Is a...