Home Woman How to Stock a Jamaican Kitchen 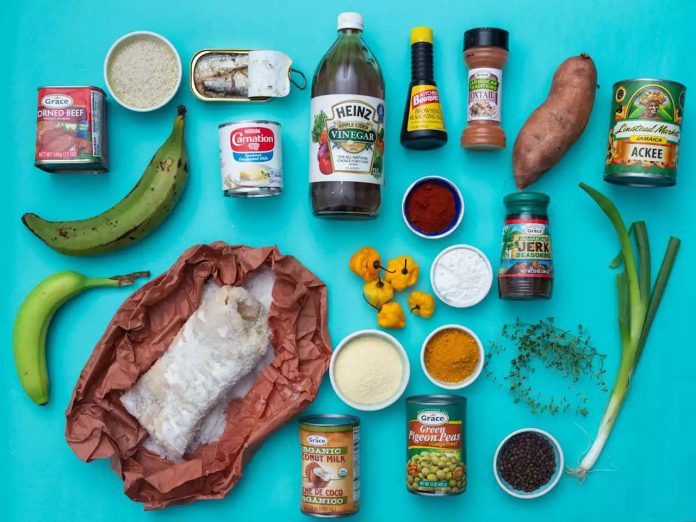 Everything you’ll need to stock a full Jamaican pantry.

Porridge
: Typically consumed at breakfast or lunch, this isn’t the blank canvass of your continental breakfast “hot cereal.” Rather, Jamaican porridge tends to be long-simmered and spice-infused, with coconut milk serving the essential function again of melding flavors that would otherwise wander off in their own gustatory directions. It also tends to boast more than one starch, such as my all-time favorite, which incorporates a thick slurry of green bananas and plantains with chewy pearls of bulgur wheat.
Condensed (Tin) Milk
Anyone who’s had the pleasure of Thai or Vietnamese iced coffee can attest that this thick, syrupy milk derivative supplies a richer, fuller sweetness than any number of sugar packets. Not that Jamaicans are averse to sugar—white or brown cane sugar is kind of our raison d’être, after all—but when we want a robust pot or cup of something-something to be sweetened, it’s our tin milk that we turn to. Once opened, tin milk should be stored, covered, in the fridge, and should ideally be used up within the week. Typical dishes incorporating tin milk:
Chocolate tea:
unadulterated Jamaican cocoa balls
and mulling it with spices in boiling water. Only tin milk has the necessary heft and richness to tame the raw dark power of the chocolate balls, which are essentially just cocoa beans ground to a gritty paste, formed, and dried.
Pudding:
A sliceable snack/dessert of baked (or steamed) starches that’s often finished off with a coating of caramelized condensed milk.
Sundry tropical shakes and smoothies:
Including papaya, custard apple, and mango preparations.
Corned Beef (Bully Beef)
Research has assured me that this canned product is, in fact, an iteration of the meat found in
Reubens
; this is good because I really couldn’t tell. What it resembles more than anything is a coarser, saltier, less-savory beef chorizo, compacted into a dense, greasy block. Or, you can go with my partner’s description:”Cat food.”
Once liberated from its distinctive, paper-wrapped rectangular cans with finicky key attachments, the meat is broken up and browned in fat, then seasoned to within an inch of its afterlife with garlic, thyme, Scotch bonnet, other aromatics, black pepper, oxtail seasoning, and other condiments, loosened up with a little water, then used in preparations such as the dinnertime classic cabbage and bully beef, sandwiches (sorry, Ron Weasley!), or a brunch hash of meat and onions.
Assorted Canned Fishes
Historically, tinned fish like sardines, tuna, mackerel, and salmon (particularly water-packed), were affordable sources of flavorful protein even when meat or fresh seafood was out of reach. But then gentrification hit the canned seafood aisles like a plague of high prices, the bourgeois influx abuzz with PSAs about omega so-and-so’s benefits for people, their dogs, and their cats. Nonetheless, their popularity persists in the Jamaican kitchen, where it’s used in expected quick-and-dirty combos—soda crackers and sardines, sardines or cooked tuna on toast—as well as composed dishes like:
Run-Down:
A hearty, spicy, coconut milk-enriched, fish-and-veggie stew, typically featuring the fattier mackerel (served for lunch and dinner, but great as a savory breakfast, too).
Seasoned rice:
The fish, typically mackerel or salmon, is drained, flaked, and added to pumpkin-enriched rice near the end of cooking to serve as an umami agent and added bit of protein.

Saltfish
Vicky Wasik
Another preserved fish worth mentioning here, though it isn’t canned, is the salted and dried cod fillet known as “saltfish,” which features most prominently in Jamaica’s national dish,
ackee and saltfish
, though it can be found in fritters and pescetarian-friendly Jamaican patties as well. Weighing about one to one-and-a-half pounds, the fillets are soaked in cold water anywhere from one hour to overnight, then boiled in fresh water to tenderize them and remove most of the salt (my mother swears by using sugary water at this point in the process). De-boned and broken into flakes, it can be incorporated into a savory batter of flour and eggs to make handy fritters, mixed in with crisp, steamed cabbage for a vegetarian patty filling, or flaked into the creamy hash of ackee, onions, and tomatoes to make the quintessential ackee and saltfish breakfast.
Salt cod can be purchased at most well-stocked fish markets, grocery stores, and
online
. When selecting for quality fillets (best done in person), look for ones that retain enough concentrated moisture to feel hefty for their size; though a dried fish, saltfish shouldn’t feel desiccated. The smell should be brightly salty and a little earthy, with barely a hint of fish.
Beans and Peas in Variety
We do use a fair amount of dried beans, lentils, and chickpeas, but, as with coconut milk, the ease, consistency of quality, and storability of canned legumes renders them the favorite option. I mean, have you ever tried to measure out exactly how many cups of dried beans you need to hydrate for a 20-pound pot of rice and peas? Neither have I. Just throw in however many cans you remember putting in last time you got the most praise for the rice and call it a day. Among our favorites are broad, oval butter beans, which figure prominently in our oxtail gravy (the marrow-infused reduction that comes from simmering browned oxtails), pert, crisp-skinned pigeon or “gungo” peas (most often used for rice and peas and in soups), and melt-in-your-rice kidney beans.
Canned Ackee
Vicky Wasik
Most noted for its co-starring role in the national dish of Jamaica, ackee and saltfish, this fruit shines in other preparations as well: as a creamy filler for seasoned rice, as a rich, aromatic filling for coco bread and patties, or as a lightly nutty, avocado-esque spread for hard dough toast.
Growing primarily in the Caribbean and Southern Florida, ackee starts out dangerously toxic, sequestered inside leathery green pods that cluster high aboveground like an imminent arboreal beatdown of clenched fists. As the fruit matures, the pods turn from green to red, their lobes unclenching and splaying open to reveal the three to five fingers of pale yellow or cream-colored ackee flesh within (called arelli), each tipped with a hard, shiny black seed. Once the pods open, the concentration of toxic hypoglycin molecules in the ackee flesh rapidly diminishes, rendering it safe for immediate cooking, freezing for later use, or canning in a light brine for wider commercial distribution.
The canned lobes are a passable substitute, and good brands to look for are Linstead Market and Grace; just take extra care not to jostle the cans or expose them to drastic temperature changes, as the creamy yellow lobes of flesh are prone to disintegrate into mush. You can purchase canned ackee online from

Everything We Know About Kate Gosselin’s Relationship With Son Collin

Lush just launched a range of vegan make up brushes