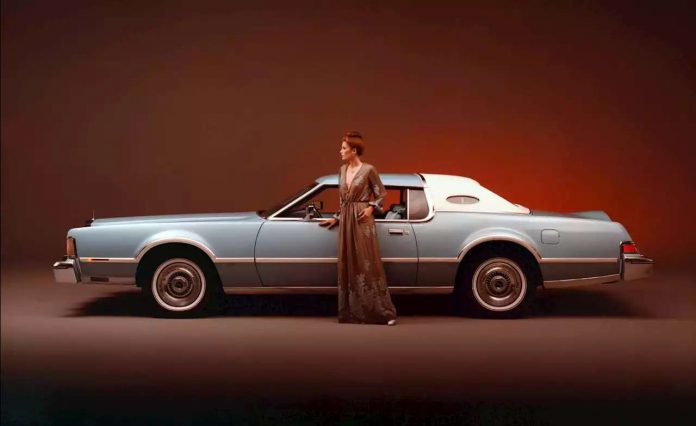 . The Mark IV Continental became the ideal platform for American presidential vehicles, while subsequent generations epitomised the big, brash, boxy styling of 1970s Americana.
The 1961 Lincoln Continental was the fourth-generation model, and pre-dated the Designer Series
The name ‘Continental’ endured almost up to the present day, with the
ontinental
marking the last of the line. Elegant though it was (with optional coach doors that nodded to the great Mark IV models of the 1960s), the contemporary Continental just couldn’t cope against the domination of SUVs.
Today, Lincoln builds four SUVs of slightly varying enormity, the Aviator, Navigator, Nautilus and Corsair. It still builds a sedan, the elegant Lincoln Zephyr, for the Chinese market.
1976 Lincoln Continental Mark IV Bill Blass Edition
1976 Lincoln Continental Mark IV Cartier Edition
The brand was also pioneering in different ways. Way back in 1976, when the idea of ‘designer’ fashion was growing in popularity and before licensing and cross-brand collaborations had really taken hold, Lincoln introduced the ‘Designer Series’. The company invited Bill Blass, Hubert de
, Emilio Pucci and Cartier’s Ralph Destino to create four unique trim levels for the Mark V Continental.
Described as comprising ‘high-fashion
… to appeal to the style-conscious buyer’, the Designer Series was a huge hit with Lincoln’s customers, accounting for nearly a quarter of all Mark Vs sold.
1976 Lincoln Continental Mark IV Pucci Edition
Lincoln continued these designer partnerships right up into the late 1980s.

In keeping with the tradition of annual model revisions, each season afforded the designer quartet opportunities to try new combinations of colour and trim. In 1978, the company boasted that each model included the designer’s signature in the Mark V’s ‘opera window’ (the small opening in the rear of the roof), as well as a ‘22-carat-gold-plated instrument-panel plaque engraved with the owner’s name’.
Inside and out, the designers dipped into the treasure trove of 1970s style. Blass gave the 1978 model a body in ‘Midnight Cordovan’, paired with a ‘Light Champagne Valino grain vinyl roof’. The interior was also finished in Cordovan.
added stripes to the bodywork, with a leather-and-vinyl interior in ‘Midnight Jade’, while the Cartier model bore the company’s crest and logo, amongst other details.
The dashboard clock from the 1977 Cartier Edition
These designer specifications are utterly of their era, reflecting not just trends in clothing and colours, but also illustrating the inflexibility of 1970s and 1980s car design to accommodate anything other than superficial changes.
Along with the rest of the industry, Lincoln has evolved substantially when it comes to incorporating custom specifications. It’s also gearing up for an electrified future, marking 2030 as the date by which its fleet will be either hybrid or pure EV. Perhaps a new generation of designers will come on board to mark that new milestone. §
1980 Lincoln Continental MkVI

Wakanda Series in the Works at Disney Plus Under Ryan Coogler’s...

Cara Delevingne just said she identifies as pansexual and ‘always will’