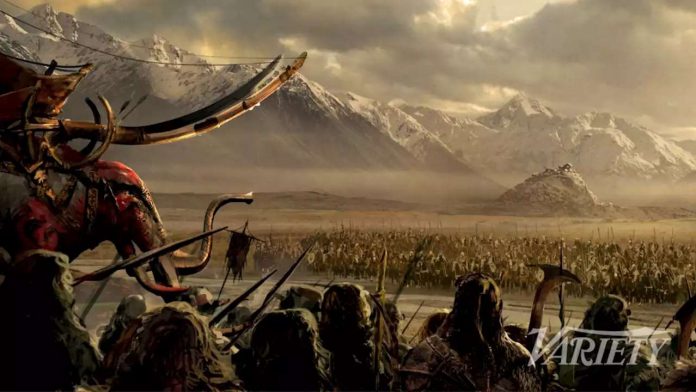 Warner Bros. has asserted that it still rules Middle-earth when it comes to film rights to “The Lord of the Rings.” The studio has publicly stated its control over film adaptations of J.R.R. Tolkie…

Saul Zaentz
Co.
The Zaentz Co. and Warner Bros. are in the middle of a private mediation process to help settle their differences about whether the studio has met its obligations to hold on to the license, according to multiple sources close to the situation. Warner Bros.’ New Line Cinema took “LOTR” to new heights with the success of its Oscar-winning trilogy directed by Peter Jackson: “The Lord of the Rings: Fellowship of the Ring” (2001), “The Two Towers” (2002) and “The Return of the King” (2003).
“New Line Cinema has maintained the theatrical film rights, both live-action and animated, for over two decades now,” a Warner Bros. spokeswoman told
Variety
. “We are currently in production on our anime film ‘The Lord of the Rings: The War of the Rohirrim’ and look forward to bringing audiences back to Middle-earth.”
Representatives for Zaentz Co. have quietly held pitch meetings in recent weeks to sell the portfolio of Tolkien rights that producer Saul Zaentz acquired in the late 1960s and ‘70s. It’s no secret that Warner Bros. and Zaentz Co. have had acquisition discussions over the last decade or so but they’ve never gotten close to a deal.
The Zaentz Co. holdings encompass rights to exploit “LOTR” and “
The Hobbit
” properties in movies, video games, merchandising, live events and theme parks. It also includes limited matching rights should the Tolkien estate decide to make movies or other content based on two compilations of Tolkien writings that were published after his death in 1973: “The Silmarillion” and “The Unfinished Tales of Numenor and Middle-Earth.”
A representative for the Zaentz Co. declined to comment.
Warner Bros. has had a long-term license on “LOTR” and “The Hobbit” since the late 1990s. The studio is said to be adamant that it has continuously met requirements to hold on to its rights by maintaining active development on the property, exercising options in a timely manner and making periodic payments to Zaentz Co.
As if to buttress that point, Warner Bros. earlier this week released key details of its plans for an anime “Lord of the Rings” movie from New Line and Warner Bros. Animation that is now dated for release on April 12, 2024.
The specifics of the license agreement between Warner Bros. and Zaentz Co. are not known, but such deals often involve producers conducting a certain level of development and production activity by pre-determined dates, among other clauses. On Feb. 15, Warner Bros. released
the first production image for “The Lord of the Rings: The War of the Rohirrim.

The project has a strong “LOTR” pedigree with Philippa Boyens, who was part of the Oscar-winning screenwriting team for “The Lord of the Rings” and “The Hobbit” trilogies, serving as an executive producer. Phoebe Gittins, Boyens’ daughter, and writing partner Arty Papageorgiou are penning the screenplay based on a script from Jeffrey Addiss and Will Matthews.
The ”LOTR” world will also expand this fall when Amazon unveils its much-anticipated TV series, “The Lord of the Rings: The Rings of Power.” That project came about through a deal between the Tolkien estate and Amazon because Zaentz Co.’s passel of rights does not include television. New Line is also on board as a producer of the series.
The film rights to “LOTR” are the crown jewel in Zaentz Co.’s profile and are the big lure for any deal with a rival studio or IP-focused entity. The portfolio being shopped at present also includes the receivables from Zaentz Co.’s significant share of profits from trilogy that grossed more than $1 billion worldwide in initial release.
The success of those films, not surprisingly, has sparked a flurry of rights fights and profit-participation litigation over the past 20 years in various battles among Zaentz Co., Warner Bros., the Tolkien estate and Jackson. Warner Bros. is also in business with Zaentz Co. as the distributor of its small but impressive movie library, which includes such classics as 1975’s “One Flew Over the Cuckoo’s Nest,” 1984’s “Amadeus” and 1996’s “The English Patient.”
One source noted that the focus for the Berkeley, Calif.-based Zaentz Co. has changed in the years since longtime president Al Bendich, the famed civil rights attorney and associate of producer Saul Zaentz, died in 2015. Zaentz, a rock and jazz music mogul and movie producer, died at 92 in January 2014.
The timing of the Zaentz Co. sale is hardly a surprise given the heat in the global content marketplace for well-known properties. Titles with built-in worldwide fandoms such as the Tolkien works are more valuable than ever, which is surely why Zaentz Co. and its banker, ACF Investment Bank, are mentioning the prospect of an opening to nab the “LOTR” film rights.
“Somebody is telling [Zaentz Co.] that this is a lottery ticket, and this is an effort to bid it up,” said a source close to the situation.
(Pictured: “The Lord of the Rings: The War of the Rohirrim.”)
optional screen reader