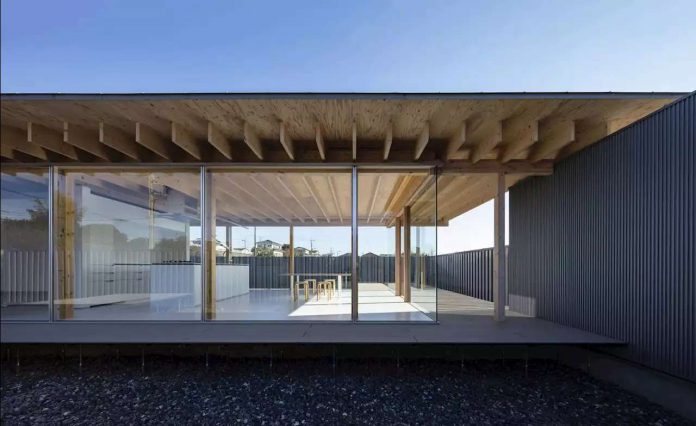 Surrounded by open fields and\u00a0sparsely built suburbs, House in Sashiogi sits in the outskirts of Tokyo, the work of Waro Kishi and his Japanese architecture\u00a0studio K Associates. Generously sized, on a 300 sq m plot \u2013\u00a0a comfortable site for the\u00a0typical\u00a0family residence in the region\u00a0\u2013 this suburban Tokyo home takes its…

Waro Kishi’s K Associates crafts House in Sashiogi, a family house in Tokyo’s suburbs that owes its experimental nature to visuals of Richard Neutra’s Strathmore Apartment
Surrounded by open fields and sparsely built suburbs, House in Sashiogi sits in the outskirts of Tokyo, the work of Waro Kishi and his
Japanese architecture
studio K Associates. Generously sized, on a 300 sq m plot – a comfortable site for the typical family residence in the region – this suburban Tokyo home takes its cues directly from its environment and the low, calm nature of its context. ’The immediate thought that came into my mind, when I visited the site for the first time, was that an open-plan, one-story house would be good for this environment,’ Kishi says. At the same time, it is sprinkled with flair and experimentation that nods to early
modernist architecture
.
Balancing the need for views with future-proofing the home – ‘Of course, the surrounding environment will go through urbanisation and rapid changes,’ says Kishi – the architecture team crafted a building that is partly open plan and transparent, and partly enclosed in a more opaque external peripheral wall made of metal sheets. This way, the flowing, bright and open living spaces inside can connect to the outdoors, offering a more flexible internal arrangement, while some parts of the house, such as bedrooms and bathrooms, can remain carefully hidden from prying eyes.

The result is a simple, low, linear structure that exudes a utilitarian, almost minimalist approach. Kishi and his team used factory-made, off-the-shelf components to design a house that is highly functional as well as cost-effective. At the same time, the interior feels luxurious in size and its potential to take in the surrounding scenery. A dramatic roof with exposed structure and pronounced, sculptural overhangs becomes a feature architectural element inside and out.
A timber frame composes the main structure, which is wrapped in glass – as the architects contrast the wood’s inherent warmth and natural feel with the coolness of industrial elements such as metal and glass. Between the house and the plot’s metal enclosure sits a sizeable outdoor space, ‘hardly a garden’, Kishi explains, which ‘will serve as a “buffer” to adapt to the future changes in the surroundings: these elements formed my concept of an open-plan architecture which is wrapped in outer layers of “double skin”’.
It all comes down to Kishi’s main source of inspiration for this well thought-out, experimental and refreshingly simple, suburban Tokyo home – Richard Neutra’s Strathmore Apartment, built in Los Angeles in 1937. ‘With this project, I dreamed of a Tokyo version of Case Study House for the 21st century, by designing an open-plan, one-story house which it was possible to build in the outskirts of Tokyo,’ he says. §
Information