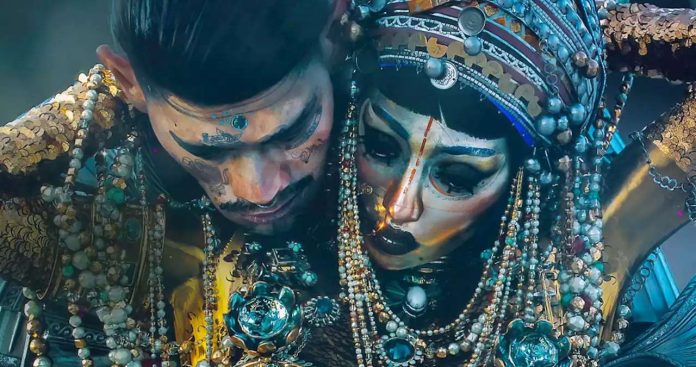 Coming off of an Oscar win for his short-animated film The Windshield Wiper, Alberto Mielgo is continuing his exploration of the meaning of love and the many forms it takes in “Jibaro”, his latest …

’s
Love Death + Robots
is a collection of animated shorts that surround three key subjects: love, death, and robots. The third season premiered in May of this year, and includes Mielgo’s return to the series after winning an Emmy for his 2019 episode, “The Witness”.
“Jibaro” follows the strange but deadly attraction between a siren and a deaf knight who is immune to her supernatural charms. The two become obsessed with each other for  selfish reasons, which leads to disastrous results.
Instead of the traditional siren from Greek mythology, Mielgo based the siren on the folklore of many different countries. Rather than entrancing men with a beautiful tune, this siren, clad in gold and jewelry, drives men into a violent frenzy with her screeching voice and seductive dance.
DEADLINE: What drew you to the imagery of the siren?
Related Story
‘The Sandman’ Gets Netflix Premiere Date & Dramatic Teaser, Reveals Mark Hamill Casting As Key Character
ALBERTO MIELGO
: It was very much based on folklore of different countries like India, North Africa, Eastern Europe… with all sorts of jewelry and assets that women wear in many tribes or cultures. The idea was to create a woman that is so full of gold and treasure that you almost don’t see a woman behind it. It’s basically just the beauty that is in front of you. It blinds you, so you don’t actually care so much if there is a person there or not.
DEADLINE: What led you to the idea to have the siren use not just her voice, but a rhythmic dance as well?
MIELGO
: There is no dialogue, so I needed to show visually what the spell does to people. The sound is sort of obnoxious, it’s different from the sirens that usually lure men with their beautiful singing.

This is actually the opposite, but it physically controls your body and it makes you loop, dance, and kill everything around you. So, I thought that dancing would be the best way to represent that, especially with a Renaissance knight that is usually extremely masculine and rigid, then all of a sudden they become extremely loose.
DEADLINE: This relationship you’ve created between the siren and the deaf knight reminds me of the question you posed in
The Windshield Wiper
, “What is love?”
MIELGO
: I would call it a relationship more than love. I’ve been saying it’s more like a toxic relationship. I wanted to create something like a relationship between two predators, and I was very inspired by videos of National Geographic where you see a crocodile trying to handle a jaguar or vice versa. Sometimes the crocodile wins, sometimes it’s the jaguar. Most of the times, they must end up injured because it’s a very bloody fight.
There’s many different interpretations that you can have and I can see myself in both characters. In the case of the girl, many times I go for the things that I cannot have or for the person that treats me badly or doesn’t care about me. But I am also like the knight, the one that perhaps goes for a person because of her beauty. Maybe I  ignore a number of red flags, doesn’t matter if that person has basically been killing my whole platoon of knights, I’m going to go for it just because there is something about her that interests me.
It happens very often in relationships. People love each other for the wrong reason and it creates suffering on both sides.
Must Read Stories

The Salisbury Poisonings is hitting our screens tonight here’s everything you...