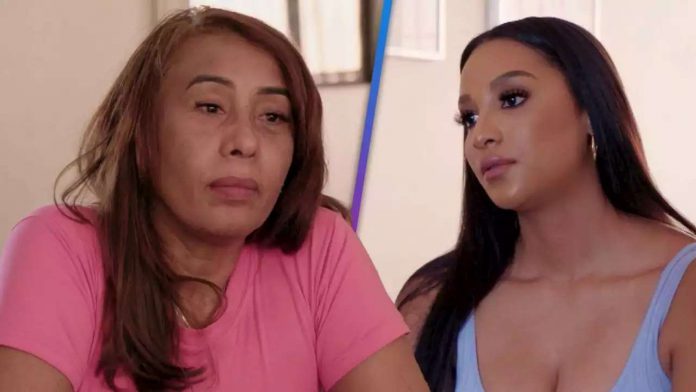 Chantel and Pedro’s mother, Lidia, have definitely not gotten along in the past.

became close with his new co-workers
. Chantel says Pedro is not happy and she doesn’t know what to do. Lidia tells her to ask Pedro what’s bothering him and Chantel replies that he refuses to tell her. Lidia shockingly appears to be on Chantel’s side and says that Pedro needs to make time for her even though he’s busy working at his new job. She muses that if Chantel has a son with Pedro, that would strengthen the marriage but Chantel shuts down the idea, noting that he told her he didn’t want to have kids for another five to seven years.
“Although I do want to have children, I don’t think that would help anything right now,” Chantel tells cameras.”I don’t want to have a child and raise them by myself because I took it upon myself to get pregnant with a man who didn’t want to be a father. That’s what I don’t want to do.”
Chantel then presents Lidia with a pair of designer sunglasses as a gift.

Lidia says that despite their rocky past and Chantel’s family not liking her or her family, she wants Chantel and Pedro to stay together. This was of course a big departure from what she told Pedro a couple weeks ago, when he confided in her about his and Chantel’s marriage issues and she bluntly told him to leave her.
“The problem here is Chantel,” she is seen telling him over FaceTime.”She is jealous. Leave her on the sidelines.”
Lidia tells cameras that seeing Chantel in person changed her mind.
“I advised him to get separated,” she acknowledges.”But seeing Chantel at my door today, wanting to have a relationship with my family, I decided to support her. I see that she made the decision to fix her marriage.”
The Family Chantel
airs Mondays at 8 p.m. ET/PT on TLC.
Pedro filed for divorce from Chantel in May and the two both