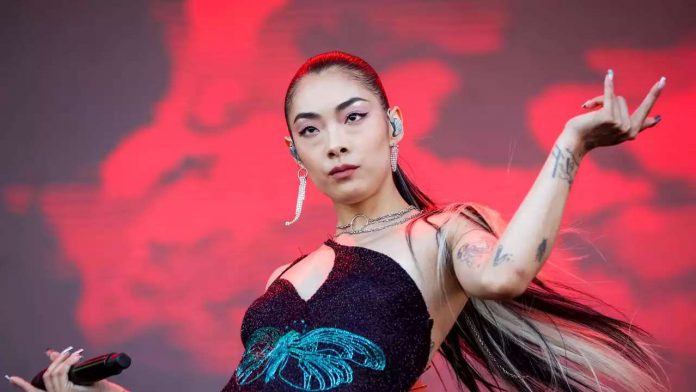 That said, the caption could have a
triple
meaning, as eagle-eyed (and maybe overly-hopeful) fans are reading more into it. Many think the pun could also hint at a surprise appearance at the London dates of Lady Gaga’s
Chromatica Ball
tour, which take place on July 29 and 30 (Hold the
Ball
Ball… G
et it?)
Gaga has been teasing special guests for the shows, including Olly Alexander and Kylie Minogue, but fans think Rina could take to the stage, too. The pair teamed last year as part of
Dawn of Chromatica
, Lady Gaga’s album of
Chromatica
remixes. Rina jumped on the track “Free Woman,” which makes an appearance on the
Chromatica Ball
setlist that fans have recorded so far.

This latest potential hint comes after the pair interacted on Instagram following Rina’s set at
Coachella
in April. In the comments under a selfie thanking the crowd, Lady Gaga wrote “YOURE A FREE WOMAN” with some fire emojis, to which Rina responded, “see u soon bestie.”
The concerts take place at London’s Tottenham Hotspur Stadium, so maybe Rina could bring her new-found soccer chic to new heights with another iconic jersey?
Want more style stories from
Teen Vogue

A D Museum closes in downtown L A and shifts to...