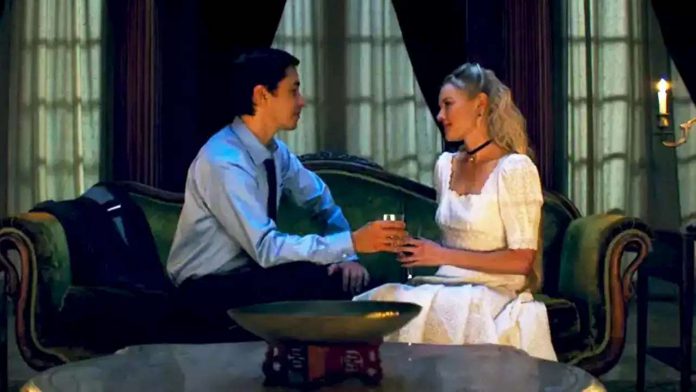 The real-life couple’s night turns deadly in their new flick.

doesn’t quite go as planned in their new flick. The real-life couple stars in Neil LaBute’s upcoming thriller,
House of Darkness
, and the first trailer teases how what was meant to be a casual hookup turns into something sinister.
Per the flick’s synopsis, a player out to score (Long) thinks his beautiful, mysterious date (Bosworth) will be another casual hookup when he drives her home to her secluded estate after meeting at a local bar.
While getting acquainted, however, their flirtation turns playful, sexy and sinister, hinting that, while Long’s character was hoping to get lucky, his luck may have just run out.

In the trailer, just as Long and Bosworth start to get intimate, creepy figures begin appearing throughout the house. When Bosworth suggests that they”play a game,” Long’s refusal isn’t exactly accepted.
“You still don’t understand what’s going on, do you?” she asks him. While Long tries to escape, Bosworth refuses to let him go, and things only get worse from there.
“Is that how it ends?” Long asks Bosworth.”Who said anything about ending?” she eerily replies.
Long and Bosworth first sparked relationship rumors last year, after they worked together on
House of Darkness

The Best Yogi Accounts on Instagram for At-Home Practice

The Thin Bendy Mat That Will Replace Your Pizza Stone

14 super quiet sex toys no one will overhear you using