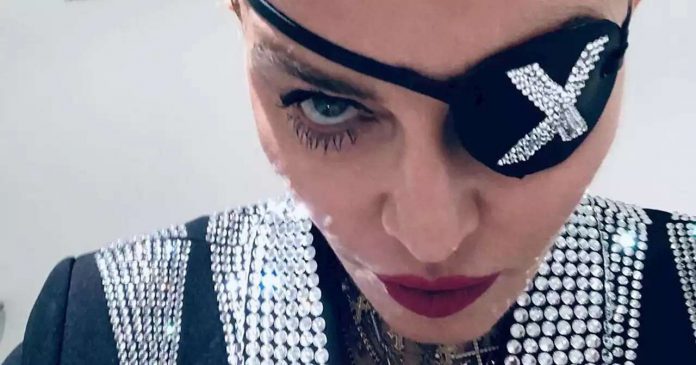 Madonna’s new album, Madame X – for which she wears a bejewelled eye-patch – is being billed as her best work in 15 years

With her bejewelled eye-patch, raunchy new video and typically no-nonsense attitude, there is no escaping Mad­onna as she hits the comeback trail.
And with her new album Madame X – billed as her best work in 15 years – out today, the singer appears to be enjoying every second back in the limelight with her bold new image.
It is yet another reinvention for the star, who now lives in Lisbon.
Ever since she moved to New York City in the late 1970s to pursue a career as a dancer, her style has evolved.
Her 1984 MTV VMAs performance, in which she flashed her underwear and writhed on the floor while wearing a wedding gown, remains one of pop music’s most infamous moments. With every album, has come a new incarnation of the Queen of Pop.
She introduced Mistress Dita, her dominating alter ego, for 1992’s sexually charged Erotica.
Then there was her “Earth Mother” look, complete with long strawberry blonde hair and bronzed body, for the trippy Ray of Light.
Now she is simply Madame X, complete with eye-patch and diamond-encrusted horsewhip.
And we’ll be seeing a lot of her alter-ego in the coming months on a worldwide tour that includes a string of shows at the London Palladium.
Asked about her choice of the Palladium, she says: “I can see everyone and they can see me, which you can’t do in a stadium. It’s very theatrical and intimate – and I’m nervous.” It marks a triumphant return for Madge who, two years ago, was in the doldrums.
She was left lonely and feeling isolated after uprooting four of her children – David, Mercy and twins Estere and Stella – and moving to Portuguese capital Lisbon.
Without her coterie of famous pals and support network in New York, the 60-year-old struggled to adjust.
She says: “I went thinking it would be an adventure but found myself going to school and football matches. I was Billy-no-mates. I got a little bit depressed.”
For an artist seemingly never shy of confidence, it is quite an admission. After all, this is a woman who has sold more than 300 million records worldwide, making her the best-selling female artist of all-time.

But having made the move, Madonna endured what she called “a few months of lonely anguish”, made worse by not being able to speak a word of Portuguese.
She had scoured the world to find a suitable football academy for talented David, before settling on Benfica’s. David, who was adopted from Malawi, had grown frustrated with his options in the States, where the game is still a minority sport.
“It would have been a lot easier if he’d liked music,” Madonna jokes. But things improved when she threw herself into her new day job – ferrying David to and from training – even if she admits she has not yet fallen in love with the beautiful game.
“I only watch when he’s playing,” she admits. “If he’s on the bench, I’m on my phone.”
With a happy home-life, Madonna’s social life clicked into place.
“I started meeting musicians and feeling inspired by them, and going out and making friends, little by little.
“I felt the way I felt when I first moved to New York, where there were no expectations. People didn’t treat me any differently in Lisbon.
“They didn’t act like I was a famous pop star or anything. I went to living room sessions in small music bars and I felt like I was just like everybody else.”
Absorbing a new culture provided the inspiration for the Madame X album, which has earned a host of five-star reviews.
The record finds her singing in Portuguese and exploring the Lisbon-centric genre of fado music.
Asked if she still gets excited about a new album, she says, “Of course. I’m feeling anxiety right now. Every time feels like the first time.”
While Madonna’s two biological children, daughter Lourdes and son Rocco, are in the States and UK respectively, she is still focused on doing the best for her kids.
The singer is determined to make life as stable as possible for David, Mercy and the twins in their new home. But she admits that having her as a mum is no bed of roses.
She jokes: “I think they wish I wasn’t Madonna. I think it would be less challenging, in their minds, if they didn’t have me as their mother.”
Read More Showbiz and TV editor’s picks

How to Deal With Cuffing Season According to Your Sign

Here’s When to See a Doctor About Period Clots